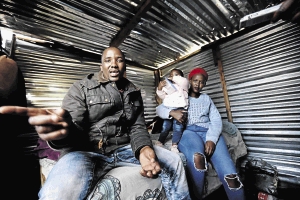 Bulelani Qolani with his family in his Ethembeni informal settlement home that the City of Cape Town law enforcement officers demolished and the community rebuilt. / ESA ALEXANDER/SUNDAY TIMES

Last Wednesday, acting against explicit lockdown regulations, the City of Cape Town carried out evictions in the Thembeni informal settlement near Empolweni in Khayelitsha.

In carrying out these evictions, Bulelani Qolani was violently dragged from his home and manhandled while naked by the city's law enforcement officers in an attempt to get him out of his home, as they set out to destroy it.

The state, mandated by our lauded constitution, is obligated to treat people with dignity. This is one of the foremost rights a South African has access to. In our country, everyone has inherent dignity and the right to have his or her dignity respected.

More importantly for the City of Cape Town, our constitution sets out that the right to dignity should be protected.

Furthermore, no person should be perceived or treated merely as instruments or objects of the will of others. The officers representing the city disregarded both. Qolani's dignity was not protected and he was treated like an object.

It is not unrealistic for us to expect that the city is cognisant of the rights of people in the carrying out of its duties and ensures that its representatives are made aware of them and carry out their duties in a manner that upholds the dignity of people.

Especially when one considers that this was not the first rodeo between the city and the residents of Thembeni. James Stent in Ground Up writes: "On 11 April, the City of Cape Town's law enforcement officers demolished about 30 shacks in Empolweni, and more structures were destroyed in the days that followed.

"These actions were challenged in the Western Cape High Court by the Legal Resources Centre, acting on behalf of those whose shacks were destroyed.

On 14 April, judge Brian Hack ruled that 130 people in 49 households should be allowed back onto the land and should have their building materials restored to them."

Cape Town is known for being one of the most classist and racist cities. This comes through when speaking to black people living there.

How can one not believe this to be true when the city continually disregards the rights of the economically marginalised - as seen in the case of Empolweni residents and in its treatment of the homeless. How can one think any differently when the city maintains an indifferent and detached approach to governance?

Economically marginalised people already live under dire circumstances, they are hit the hardest by the lockdown, which has affected our daily lives, jobs and sources of income.

The least it could have done was to wait for the lockdown to end. For the city to pursue evictions not once, but twice in the same community during a harsh period such as this is testament to the harsh treatment the economically marginalised, largely black people, are continuously exposed to due to their desperation for basic human rights such as shelter.

It is even more alarming for this to occur despite our progressive constitution, which prioritises the provision of basic human rights such as housing - which Bulelani Qolani was humiliated and dehumanised for. Living as an economically marginalised person is already dehumanising and violent enough.

Knowing the reality of SA, it is infuriating to see the worsening of people's indigent conditions by taking away that which serves as their homes.

This is an indictment of our leaders. People should not be holding onto their shacks, they should be in homes.

The city neglects its role in this regard, even if it is to put pressure on national government.

Carrying out of governance duties in one of the most unequal societies in the world cannot be devoid of holistic understanding of the context we exist in.

If you are going to lead in this country, the prioritisation and protection of the economically marginalised should be the bedrock of your governance.