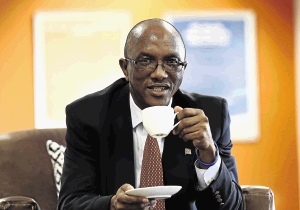 Auditor-general Kimi Makwetu says irregular spending in municipalities could be prevented if basic controls were put in place. /Masi Losi

Last week's report by auditor-general Kimi Makwetu was a clear indication that myriad challenges are apparent in the public sector regarding implementation of anti- corruption measures to punish political leadership.

Provincial heads of departments and municipal managers do not suffer any consequences for noncompliance.

Expressing his disgust, Makwetu said: "We remain concerned that only 2% of the municipalities are fully complying. This is in spite of all the reporting we have done in this area, the red flags we raised, and the many recommendations we have made. Uncompetitive and unfair procurement . and inadequate management were common."

Lack of proper supply chain management has resulted in irregular expenditure increasing to R32.06bn from the R25.2bn reported last year.

However, the report by auditor-general (AG) was the first of its kind since the Public Audit Amendment Act came into effect on April 1 last year, giving the auditor-general extended power to act on corruption and abuse of funds. He said that only nine selected municipalities had been audited in terms of the amended act this year.

The truth is that parliament has created institutions to act on corruption and abuse of funds but no action has been taken against the culprits. Chapter 9 institutions were created to watchdog over the way taxpayers' money is spent but they have no powers to impose punitive measures where they find wrong. The can only make recommendations which are often not implemented.

Municipal mess adds to our woes

At least R32bn.This is how much municipalities across the country spent irregularly in the 2018/19 financial year.
Opinion
2 years ago

Makwetu has highlighted that "he previously raised red flags and made many recommendations"?

Why were his previous recommendation overlooked and red flags ignored? This act came into effect last year but the auditor-general's report is telling us no action can be taken soon. For instance, he emphasises that "the material irregularities we identified and reported are not complex accounting or procurement issues and could have been prevented through basic controls".

It is shame to have a hardworking AG who can only identify the problem but have no permanent solution.

The problem with ruling parties in municipalities and provincial government is that they cannot distance themselves from allegations levelled against members because all the corrupt officials are their deployees.

The questions that political leaders need to ask themselves are: what causes the corruption in a society defined by abject poverty and polarisation? How are they going to bring back trust in communities when three spheres of government cannot distinguish what is corrupt or not corrupt?

Parliament must also embark on a deep reflection on its role. The fault line is the hiring practice and firing of those who defy corrupt political orders. Some administrators with amazing expertise are purged for no reason.

Government must ensure that knowledgeable and skilled officials need to be brought back into all three spheres of government. For that the state needs to function as it was intended - to render sustainable service to the people - rather than as a source of power and status.

Finally, cadre deployees and political party leaders must ensure that management and corruption are at the top of the agenda in their next meetings. There is a difference between management and moving the tax and rates of hard-working citizenry directly into the pockets of friends and families of crooked officials.

The duty of the AG is to uphold government's function with integrity, public servants must act likewise.

The political instability in the Tshwane metro has contributed largely to Gauteng's irregular expenditure, findings by the auditor-general stated.
News
2 years ago

Parliament is looking for a new auditor-general to take over from Kimi Makwetu when his term ends on November 30.
News
2 years ago
Next Article