Spoiling for a fight no one will win 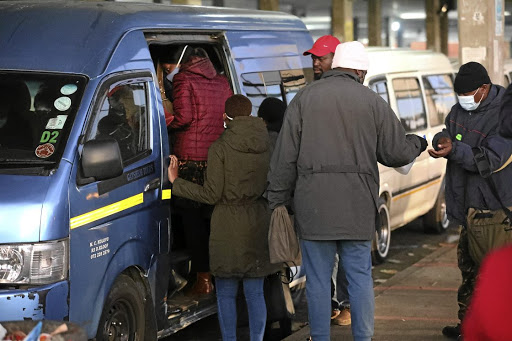 Taxi commuters at Baragwanath Taxi Rank, in Soweto, where taxis are operating at full capacity. The writer says they are all too mindful of the personal risk to exposure which comes with every trip they make.
Image: ANTONIO MUCHAVE

"Andizi! I am not coming to the fight you are inviting me to."

This is what minister of transport Fikile Mbalula told taxi bosses through a press briefing yesterday as operators defied government's lockdown regulations to load passengers at 70% capacity - spoiling for a fight.

Operators also began inter-provincial travel yesterday, also against lockdown rules, saying they needed to make up the substantial revenue lost through the lockdown.

Their anger follows what they say is the minister's inconsistency and failure to meet them as they expected he would to discuss their demands at the weekend.

"My plea to the taxi industry is that let us not promise war every time we differ about something.

"We appreciate the difficulty faced by the industry and it has set us on a collision course we don't need. Every time we differ, we should not promise [each other] war."

Commuters are scared of the possibility of getting infected with the coronavirus after taxis began loading at full capacity and resumed ...
News
1 year ago

There are two things to point out in this saga.

The most obvious is that at the centre of this war with authorities are thousands of commuters who are now forced to travel in vehicles where social distancing is limited.

Those we spoke to were relieved to be able to go to work without interruptions. However, they are all too mindful of the personal risk to exposure which comes with every trip they make.

At a time when experts expect infections in Gauteng to spike significantly in the coming weeks, creating spaces of potential contamination is irresponsible and may carry deadly consequences.

The second, and equally worrying, is what appears to be a growing culture of defiance against government in our country.

Granted, in any democracy, robust engagement and protest is part of building a culture of accountability.

However, the taxi operators' decision to defy regulations does not occur in a vacuum.

It is a symptom of a growing trend where state rules are undermined by various sections of society.

Justification aside, this behaviour demonstrates an erosion of a social pact between government and the people it leads.

Minister of transport Fikile Mbalula has warned the taxi industry to refrain from breaking the lockdown regulations as the government considers its ...
News
1 year ago

All taxis will operate at full capacity from Monday, the SA National Taxi Council (Santaco) vowed on Sunday, as it rejected the R1.135bn in relief ...
News
1 year ago

'Whatever happens, happens', say passengers travelling to other provinces in taxis

“Whatever happens on our way, happens.”
News
1 year ago
Next Article