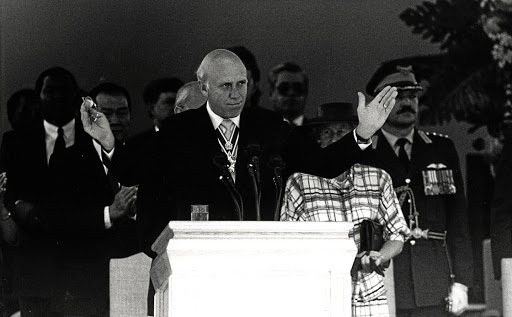 FW de Klerk played an instrumental role in the negotiated settlement between the former apartheid regime and the ANC. /Ruvan Boshoff

What constitutes accountability? This is an important question, especially in the context of debates and conversations about responsibility for gross abuses.

What if leaders who presided over a racist regime, officials who participated in state-sponsored crimes including killings and torture and beneficiaries of those injustices never face prosecution?

This is the conundrum presented by F W De Klerk's continued involvement in public life both in SA and globally, post his instrumental role in the negotiated settlement between the former apartheid regime and the ANC.

Is trial and imprisonment the only way of realising accountability? Punishment is widely accepted as a necessary demonstration of justice being done. Without it the sentiment is that perpetrators get off scot free.

With the persistence of social inequality and systemic racism, this sentiment is strengthening and with it the attitude that there is no longer room for dialogue.

Those on the liberal ideological spectrum are quick to defend rights and freedoms to expression and dignity, sometimes even above those of the victims.

South Africa's last apartheid president, F.W. de Klerk, has withdrawn from a US seminar about minority rights because he did not want to embarrass ...
News
1 year ago

This is as self-righteous, if not more so, than those who feel justified for lashing out - even violently - because of the real and deep harm they've suffered.

Although the anger and resentment over centuries of marginalisation and of being present-day targets for abuse is justified, turning on the oppressor with the same dehumanising hatred makes victims more vulnerable to becoming and doing the very thing which they hate.

But beneficiaries of apartheid and systematic racism generally have ridden on the wave of forgiveness demonstrated by victims of abuses and feel emboldened.

Following the abolition of unjust laws, discrimination and prejudice tends to be increasingly insidious. Whereas the overt apartheid dissipates, the "apartheid of the mind" as Pumla Gobodo Madikizela calls it, continues.

In her powerful book A Human Being Died that Night: A Story of Forgiveness, Gobodo reflects on the life of Eugene de Kock. Using his experience of being scapegoated for apartheid's crimes, she unpacks the mental compartmentalisation of white people.

"White South African bystanders were able to live with the brutality against blacks because it was being carried out in relative secret, in that 'other' world. Everyone engaged in an 'apartheid of the minds', in psychological splitting. It was only when the truth came out in the open that some felt they could no longer live with it.

"De Kock and many [others] have said repeatedly that what kept them going - what sustained their zeal and conviction in the rightness of crushing the heads of thousands of black activists - was the tacit but powerful support they felt they were receiving from the beneficiaries of apartheid privilege - the polite churchgoers, the cultured suburbanites, the voters. It is at their feet that the responsibility for apartheid, ultimately, can be laid."

Sadly, many beneficiaries of privilege today continue to live in this dual reality.

Dialogue is a concrete form of accountability. Gobodo says, "[it] humanises the dehumanised and confronts perpetrators with their inhumanity. Through dialogue, victims as well as the greater society come to recognise perpetrators as human beings who failed morally, whether through coercion, the perverted convictions of a warped mind, or fear."

By shutting De Klerk down and out of sight, we let him and others escape public scrutiny that would continue to expose them and convict them of their responsibility.