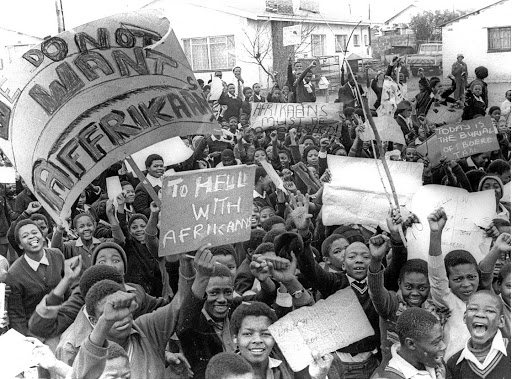 FILE IMAGE: The students of June 16 1976 were in good spirits when they embarked on their protest against the use of Afrikaans as a medium of instruction at their schools.
Image: Mike Mzileni, courtesy Baileys Archives

Forty four years ago, hundreds of thousands of young people, mostly school children, took to the streets of Soweto demanding, among other things, a fair chance at education.

They were heard but not listened to by government hellbent at making black Africans a little more than useful tools to their white countrymen.

Instead, they were shot at, some killed, as the racist government of the time strengthened its oppressive hand against dissent.

Five years ago, students across South African universities brought the nation to a standstill demanding yet again, a fair chance at education.

Some doors were opened, some pledges fulfilled, but ultimately their cry for a broader society that offers equal opportunities for all was not heard.

This year the world was hit by a deadly pandemic which swept through our country and ravaged our economy.

Companies have shut their doors, incomes have diminished and joblessness is on the rise.

On the harsh end of the scale are for the most part, young people, full of dreams and talents, starring into an abyss of lost opportunities.

'I was born to capture history'

Veteran and world acclaimed photographer Bongani Mnguni was born to capture historic moments. From when he was a young boy, Mnguni developed his love ...
News
5 years ago

A majority of that are people under the age of 35.

Some are skilled, many others not, thus making them unemployable and unable to create meaningful initiatives to sustain themselves.

Government interventions have failed partly because by their very nature, they have fostered unsustainable dependency on the state rather than supporting on a large scale a culture of innovation.

In today's edition, commemorating Youth Day, young people tell of their journey in a country where their identity still determines their fortunes.

Their struggles ought to compel our nation to be far more deliberate in its quest for equality and a new economic order that offers the youth a fair chance.

Their breakthroughs and triumph reflect their resilient spirit and a thirst to succeed against all odds.

Similar in all of them is a strong desire to be given an opportunity to reach their potential.

May they be heard.