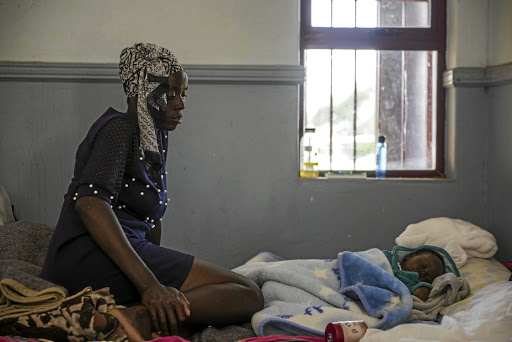 Homeless mom Beauty Jani and her newborn are residents of a shelter in Centurion following the declaration of the lockdown. Men are urged to step up in childcare. / Gallo Images/Alet Pretorius

For many South Africans, including myself, Sharpeville is unfortunately eternally married to the massacre of March 21 1960 when the apartheid regime police opened fire on a crowd of unarmed black SA demonstrators. A piece of history that will forever hover over the black township of Sharpeville.

I've never formally tried to express sound in my writing, I've never had to. But, my late mother, Lathiwe Elizabeth Botha, could. And she was an even better storyteller. Her narration of the events of that particular day would be, screaming, groaning, and crying, drowned out by a deafening cacophony of police sirens. The aftermath? Sixty-nine lifeless bodies, and 180 more injured.

Horrific. Gruesome. Traumatic. Terrifying. Cruel. I remember mentally exhausting adjectives of that day as we grew older and older.

And then, out of nowhere, the room would suddenly be filled with warmth, love, care, cheers and laughter as if pain and pleasure occurred on a continuum and my mother had the switch. My mother had that ability.

Thuli Mashaba and her son Siyabonga Malinda have a relationship like no other.
Good Life
2 years ago

A resilient, resourceful, and respectful woman who single-handedly raised all her seven children. A domestic worker who knew the insides of a prison cell, because she simply had to sell sorghum beer because her children sleeping hungry was something she did not want to have on her conscience.

In 1998, when I heard my mother died, I felt empty. For years, I was wishing the world could swallow me whole. For the first time, I felt exposed and alone. I struggled for years to accept her death.

My mother? An amazing woman! Her experience? Not so exceptional. I am writing this a day after Mother's Day and I am deeply saddened that many years later the system has reproduced many Lathiwe Elizabeth Bothas.

While my mother's character and ability to tirelessly provide is something to marvel at, the conditions that pushed her to that point - not so much.

This year's Mother's Day is like no other. Covid-19 has triggered a significant global crisis and its effects are being severely felt by women and other vulnerable groups.

The scales are perpetually tipped against women, and the imbalance is further perpetuated by the pandemic. As the world stops and the economy tumbles, it is rapidly reproducing mothers without jobs, mothers trapped with their abusers, mothers burdened with housework and childcare.

Siphokazi Mafa cannot wait for the Covid-19 unemployment grant which she says will go a long way in helping her and her family put food on the table.
News
2 years ago

The system has crudely fetishised the woman with her back against the wall. The single mother who is single-handedly raising her kids against all odds. Society needs to introspect. Men have to do better. Men need to step up.

Women beating all the odds to put food on the table need not be the accepted narrative. Men should take this time to ensure mothers are not carrying the rubble of the pandemic by themselves.

As we prepare for life after this global crisis, I hope that the "new normal" presents mothers and women with sizeable and economic empowerment to rewrite the ''against all odds'' narrative.

I want to honour the mothers who have been on the front line since the beginning of the Covid-19 pandemic. Your efforts are not going unnoticed and thank you for your selfless sacrifices.

To my dearest mother, a Happy Mother's Day to you and every mother that has left us. Your sacrifices were not in vain.