When black-owned companies show up, communities are bettered 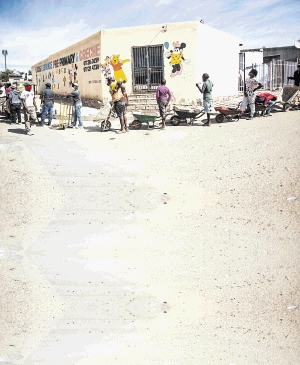 About three weeks ago, I started a Covid-19 food voucher drive that was aimed at providing food vouchers in the form of money to families in need of assistance.

The idea began when I reflected deeply on the impact of the lockdown on migrant families in particular.

I was concerned that while many citizens of our country would be cushioned by social welfare provided by the state, a lot of migrants would not be.

And given that so many of them work in industries most affected by the lockdown, such as the beauty industry where many women are hair stylists, the cleaning industry where they work as domestic workers and similar work, I knew that some kind of intervention was needed.

What started as me offering to give vouchers to migrant families developed into a nationwide movement of food vouchers.

This happened after thousands of SA families contacted me to inform me that they were unable to put a meal on the table due to loss of income and in some cases, the slow provision of food parcels by local government.

The realisation that help was needed for far more people than expected resulted in the massification of the food drive.

Over the past few weeks, over R100,000 was raised from individuals and companies, at home and abroad, and we ensured that hundreds of families received their food vouchersto the value of R300 per voucher, sent directly to the beneficiaries through
e-wallet and other identical services.

It was while mobilising for more funds that I engaged Moja Love, DStv channel 157. I requested a donation of R10,000, but received a response soon thereafter from its executive leadership, pledging R50,000.

This exceeded what I had hoped for and enabled me to extend the list of beneficiaries, many of whom were people on chronic medication who didn't have food, and pregnant women as well as those who were breastfeeding, but didn't have anything to eat.

A few days ago, I also received a call from the Fani Madida Foundation, pledging R5,000 to the food voucher drive. The foundation was established by former Kaizer Chiefs striker Fani Madida.

The foundation aims to contribute meaningfully towards sports and community development across the country.

While provinces across the country have closed their borders as part of efforts to contain the coronavirus pandemic, migrants and people on the move ...
News
2 years ago

The donation from the foundation was directed towards child-headed households and the elderly, who have also been contacting me and the administration team requesting help.

Every donation was greatly significant to the success of the food voucher drive, especially because donations were being made by ordinary people who had little to spare, but wanted to extend their solidarity.

But the donations by Moja Love and the Fani Madida Foundation are of great significance to me because they are a demonstration of how black-owned institutions can play a significant role in poverty alleviation in our communities.

They are a demonstration of how much better black communities can be if there's a deliberate and sustained investment into them.

I have seen Moja Love in the betterment of our communities. A year ago, the channel sent a young nyaope addict to a private rehab facility at its own cost.

The Fani Madida Foundation has also been instrumental in developing young talent in our townships.

This is how loving black people look like, and it is my sincere hope that even after the lockdown is over, these institutions will continue to demonstrate this level of commitment to ploughing back to our people.

1,600 families to be moved out of cramped shantytown

The days of worrying when heavy rains hit Setjwetla informal settlement could come to an end for thousands of its residents.
News
2 years ago

Residents of Mooiplaas and Spruit informal settlements in Centurion, north of Johannesburg, came out in numbers to collect food hampers on Wednesday, ...
News
2 years ago

Undocumented foreign nationals have been arrested in the Durban CBD during an operation by the department of economic development on Tuesday.
News
2 years ago
Next Article