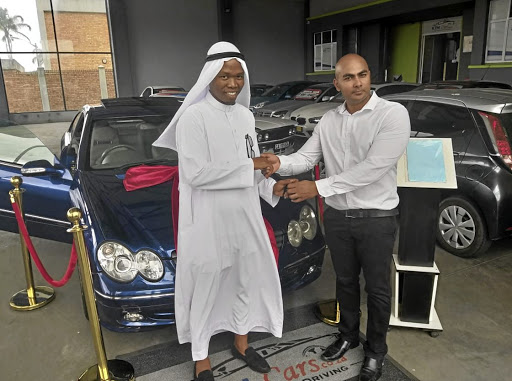 A KwaZulu-Natal car dealer, KZNcars.co.za, is accused of selling a vehicle with a fake disc and later took back the car and kept both the purchase amount and the vehicle after promising to refund the buyer.

Siphosenkosi Gqweta, 30, said on March 7 he sported a second-hand Mercedes-Benz which was advertised for sale on KZNcars.co.za internet for R90,000.

He said he later visited the car dealer to view the vehicle but was unable to test drive it after sales person, Rufus Thomas, allegedly told him that its battery was flat because the car had not been driven for a long time.

"I was also told that the car was never involved in an accident and had no defects. I was urged to sign the offer to purchase which I did," Gqweta said.

A day later, Gqweta, a father of four, said he deposited R85,000 which was part of his provident fund payout after he had resigned from his previous employment in January.

On March 9, he went to collect the car, but there were no keys to open it or test drive it and the dealer had to use a locksmith's service to open it, Gqweta told Consumer Line.

"Before calling the locksmiths they opened the car from its bonnet, took pictures and later filled it with petrol before delivering it," he said.

Nomsa Kiefer, 40, of Honeydew, is spending sleepless nights after her Facebook account was hacked and used to defraud desperate consumers who are in ...
Opinion
1 year ago

He said it was only then that he noticed that the car had more problems than he anticipated.

Gqweta said if he had been given a chance to test drive the car before paying for it, he would not have proceeded with the purchase. He said after driving the car for 54km he noticed that the brakes were faulty as it couldn't do sudden stop.

Gqweta said the shocks of the car were also worn out, among other defects in the car. He returned it and after the dealership owner, Venton Perumal, confirmed the defects he offered to fix them, Gqweta said.

He said their mechanic could not fix it and he later demanded the refund of his money which he is battling to get even though Perumal had offered to refund him within 30 days.

Consumer Line has seen an email in which Perumal offers to refund Gqweta his money within 30 days.

"Instead, they later offered me another Mercedes-Benz C55 AMG at a price of R149,999 which I rejected. Rufus Thomas decided to give me this car [the C55 AMG] as a courtesy car but they then went to a police station and opened a case of theft against me," Gqweta.

When opening a business account make sure that you are able to fund the charges that the bank will bill you to have it running.
Opinion
1 year ago

He said he took the car to the Amanzimtoti police station so that he could get Perumal's attention. It was only then that Perumal offered to refund his money within 30 days, Gqweta said, adding that he offered to return the defective courtesy car on the expiry of 30 days.

Gqweta said the car he intended to buy had been re-advertised for sale.

Perumal threatened to sue Sowetan should Ggweta's story be published. "The comments are untrue and as per legal advice, if any of this false information is published we will suffer business loss and interruption. Until a full investigation is done with the correct information, we will be forced to take legal action against the newspaper," Perumal said.

He has not responded to follow-up queries after being asked which information was false and whether he has at any stage offered to refund Ggweta.