Where are all the South Africans trained as doctors in Cuba? 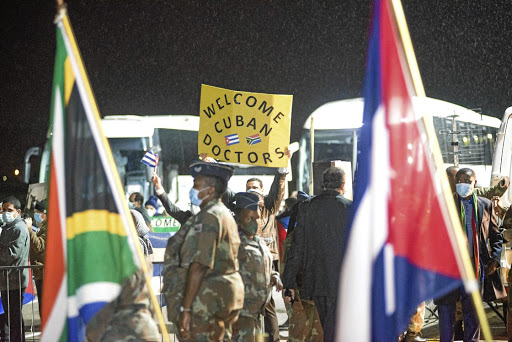 A Cuban team of 216 health professionals arrive at the Waterkloof Airforce Base in Pretoria to help fight the spread of Covid-19 in South Africa. / ER Lombard

A few days ago, a group of just over 200 health workers from Cuba arrived in SA on a mission to assist the country in our fight against the Covid-19 pandemic.

They include physicians, epidemiologists, biologists as well as healthcare technology, engineering, and biotechnology experts. According to the SA government, they will be deployed in hospitals across all nine provinces, aiding us to fight this pandemic.

Many of us celebrated the arrival of this group, but perhaps in our excitement, we neglected to ask critical questions - questions we cannot afford not to ask.

At the heart of our celebration is the political history that Cuba and SA share. Cuba was instrumental in our fight against apartheid.

Between 1975 and 1991, the Cuban government sent more than 300 combatants to Angola to fight the illegal invasion by the SA Defence Force (SADF) constantly deployed to the frontline states, giving refuge to our national liberation armies such as the Azanian People's Liberation Army (Apla) and Umkhonto weSizwe (MK).

In Angola, the Cuban forces contributed significantly to one of our greatest victories: the Battle of Cuito Cuanavale. Many activists and scholars credit this battle with the ushering in of the trilateral negotiations which secured the withdrawal of SADF troops from both Angola and Namibia.

The Cuban government of Fidel Castro was also instrumental in assisting other African countries in their struggle for independence. These include Mozambique, Algeria and 15 other countries. It is no wonder that many of us are fond of the country and its people. Ours is a shared history of struggle and solidarity.

But the reality of the situation is that the arrival of Cuban doctors now demands interrogation.

As a starting point, we must ask why the SA government is bringing in Cuban health workers when we have unemployed health workers in our country. According to the Democratic Nursing Organisation of SA (Denosa), there are at least 1,000 unemployed nurses in Limpopo alone.

The National Association of Democratic Lawyers has welcomed the arrival of "highly skilled and specialised doctors" from Cuba.
News
2 years ago

The SA Medical Association (Sama) has also gone on to argue that bringing in the Cuban health workers is premature as the country is managing the pandemic fairly well. And this is evidenced by the statistics. The World Health Organisation (WHO) has also commended SA for its impressive response to the pandemic.

Furthermore, it is concerning that the SA government, which has been investing millions of rands annually in medical exchange programmes with the Cuban government over the years, is not drawing from the experience and expertise of these people into whom it has invested so much.

Where are the hundreds of doctors we have been sending to Cuba? Surely by now we should be in a position to harvest their expertise as many of them should have been practising for years now. Their training was done with taxpayers' money, and this is also money that is being used on Cuban doctors who are allegedly costing taxpayers almost half-a-billion rand.

And I'm certainly not saying the Cuban doctors must not be remunerated, I'm saying if they aren't needed, as Sama contends, there should be no reason for us to spend this much money on them. It should be used to acquire the personal protection equipment (PPE) our local health workers are pleading for.

I don't underestimate the importance of having all hands on deck in the fight against Covid-19. We have seen the devastation it has caused in countries such as Italy, Spain and the US, where thousands of people perished. There is no doubt that we are dealing with a very dangerous virus.

But help must not ignore our material realities, and our context as a country. We have unemployed health professionals and we have invested in training doctors in Cuba. We should be tapping into this critical resource. Otherwise, why did we invest in them in the first place?

More than 200 Cuban doctors who jetted into the country yesterday are world-renowned Covid-19 experts who will be deployed where they're needed the ...
News
2 years ago

The South African Medical Association (Sama) says the arrival of over 200 medical specialists from Cuba is a “little bit premature”.
News
2 years ago

What's the price of Cuban help?

We welcome the deployment of more than 200 Cuban doctors to our country this week to assist to contain the spread of Covid-19.
Opinion
2 years ago
Next Article