Homecoming was bitter-sweet for many returning after years in exile 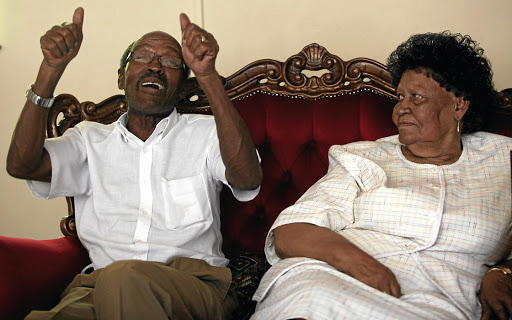 Dr Pule Matjoa, a former exile, in high spirits during conversation with former Free State premier Winkie Direko in Bloemfontein. The stories of many former exiles have not been heard. /Simon Mathebula

The annual commemoration of April 27 as national Freedom Day has been compromised by the outbreak of the coronavirus in 2020.

The lockdown imposed by the government, however, provides an opportunity to think about liberation studies/history differently.

In the broader historiography of the liberation Struggle, the emphasis is on the collective, at the expense of the role played by individuals. The latter's 'neglect' downplays the significance of "writing history from below". It is within this context that the experiences of the "disciples" are interrogated. Tragically, they remain "voiceless" as many have died.

Having spent almost three decades in exile, they cherished what became known as "homecoming".

The oversimplification by many scholars dealing with returning exiles poses challenges when arguments are made that going "home" means returning to the country of origin. The fact that they spent more than three decades in exile means they may have found "home" in exile.

The return of political exiles was facilitated by a number of legal and political initiatives. In March 1990, the ANC's national executive committee (NEC) announced that a group of 30, led by Jacob Zuma, was to be dispatched to SA to assess the situation and to make the necessary consultations.

The NEC in Lusaka also moved quickly to establish a repatriation office under Jackie Sedibe. Another initiative was the 1991 Memorandum of Understanding on the voluntary repatriation and reintegration of SA refugees and exiles entered into between the government of SA and the United Nations High Commissioner for Refugees (UNHCR). This granted blanket amnesty to returnees who had committed political offences before November 8 1990.

In his book A Circle is Closed: A Lifetime in Exile, Prof Bethuel Setai writes: "One of the realities of being part of any political struggle is that the attendant sacrifices assume many and varied forms. You are deprived of your home, time with your family, and an opportunity to watch your children grow.

"One of the unappreciated aspects of a commitment to a political cause is the financial implications. Being a refugee in the countries where I lived and worked, I never had a permanent job, and consequently was never able to build a solid retirement fund."

The deepest hurt of life in exile and most profound sorrow felt were that they were unable to take part in the rituals of birth, marriage, and death in the families they had left behind.

It was no secret that many of those who returned were exposed to major challenges of integration into the SA communities. This was also complicated by the fact that some of the people who knew them when they left the country had died, while others did not recognise them.

Some experienced rejection from family members and were seen as "burdens" because there was no guarantee of employment upon their arrival in SA.

It should be noted that not all the disciples returned home after 1991. Billy Mokhonoana died in London in a motorcycle crash and his remains have not been repatriated to SA. Peter Swartz is believed to have disappeared in London in 1965, never to be seen or heard from again. Theodore Motobi contracted TB and died in Angola in 1980.

However, those who did return "home" found the place so strange compared to their experiences of three decades before. One of the main challenges experienced was the need to re-adapt to a society that had changed profoundly in their absence.

Because of the gap between exile life and home life, most of them had to reassemble an exile-broken history into a new whole. In exile, many activists had forged passports from other countries, which facilitated their travelling around the world; at that time, it was a process within the country to get genuine documentation. The longer it took, the more impatient they grew.

As I went through a Facebook post of Free State premier Sefora "Sisi" Ntombela on International Women's Day, the reality of a missing Thabo ...
Opinion
1 year ago

On October 19 1977, a seismic event occurred in the South African liberation Struggle, putting paid to the dominant role of the black radical ...
Opinion
2 years ago
Next Article