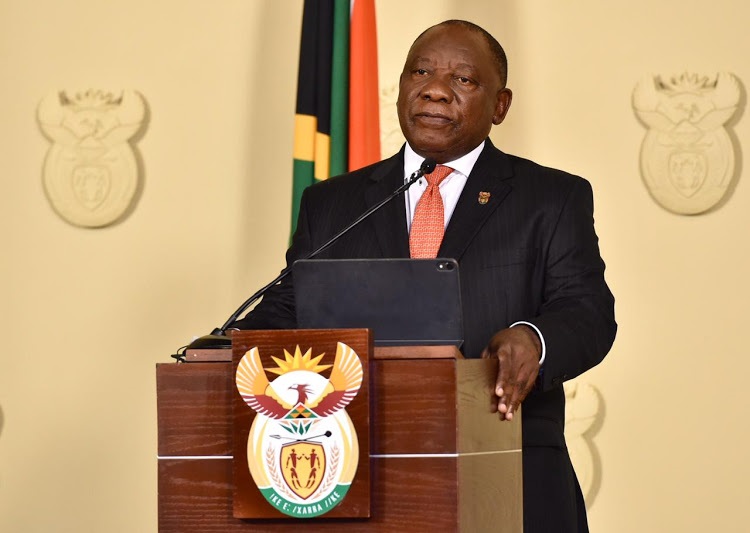 The moment when President Cyril Ramaphosa announced the 21-day lockdown extension became a moment in history when he morphed from an ordinary person into a man deserving of their place in history, the writer says.
Image: GCIS

It is often said that some people are born great, some become great and some have greatness thrust upon them.

And indeed, history is littered with many examples of greatness being thrust upon people. Often, it is moments of great adversity that force ordinary people to rise, to lift themselves above horizons.

There are moments in life that define a man - moments we look back to and say: "This was the moment in history when this man morphed from an ordinary person into a man deserving of their place in history."

A few days ago, we witnessed this kind of moment in SA. It happened on the night the president of the Republic, Cyril Ramaphosa, announced the decision to extend the national lockdown by two more weeks to ensure that the critical strides that have been made are not reversed.

The speech that evening, in the face of unimaginable crisis, was more profound than every single speech I have ever heard him make. In that one speech, the man finally became my president. He ceased to be the awkward and detached person he has always sounded like, whose speeches are clearly the work of speech writers who, though they have the language, lack the human touch that separates a speech from a source of inspiration.

On that evening, he finally became the captain of the ship that is South Africa - the ship that I and many others are aboard, as patriots and believers in the capacity of our country to fashion a higher civilisation.

Ramaphosa did not give us all the answers we needed. He did not resolve all the personal salient problems that confront us as we negotiate existence in times of Covid-19.

And these problems are subjective and specific. For me personally, the national lockdown has been extremely frustrating financially. I was supposed to have relocated to my new house in Johannesburg but was unable to due to the regulations imposed just shortly before month end.

As such, I am still residing in an apartment I am renting and therefore had to pay rent for this month. But the bank also took its money for my home loan. So, I paid twice - money I do not necessarily have.

It's important to hold state accountable for wrongdoing

Our country has handled the Covid-19 pandemic exceedingly better than countries far ahead of us in terms of access to resources and development.
Opinion
1 year ago

Listening to the president, I also did not know how we are going to rescue this academic term as students because universities have come to a standstill and there does not seem to be a coherent vision around what the next step is going to be.

As a guardian to my younger brother who is in high school, I do not know how he will be examined in this critical penultimate year of his studies, which will determine if he can get into a university of his choice.

But broadly, I don't know what education will look like for children of the poor who can't do e-learning like some can. I worry about how e-learning will perpetuate structural inequalities already suffocating SA and hurling millions at the margins.

And I know this because in his speech, the president inspired hope that this is possible. He comforted the disturbed in a deeply profound way. And by so doing, Ramaphosa finally became the president we have all been waiting for him to become. He cemented his place in history.

I can only hope that this kind of decisiveness, coupled with genuine compassion, will characterise the remainder of his presidency. Our country deserves no less.

Ramaphosa will respond on Friday to demands to lift alcohol ban

President Cyril Ramaphosa has asked the Gauteng Liquor Forum to give him until Friday to fully respond to its letter demanding the lifting or changes ...
News
1 year ago

Lockdown extension to have 'huge' impact on economy, experts say

The extension of the national lockdown will have “huge” implications for the country's economy, experts say.
News
1 year ago
Next Article