Now is not the time to evict people 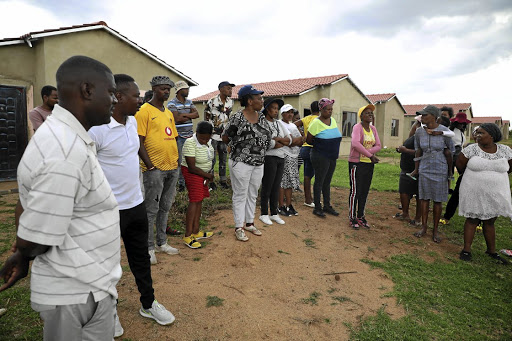 Daveyton residents outside the RDP houses they were evicted from.
Image: Antonio Muchave

The evictions of over 100 families in Ekurhuleni last week goes against the government's efforts to contain the spread of Covid-19.

About 123 families who had illegally occupied a state-owned housing project in Daveyton were forcefully removed by the city's metro police on Thursday.

This led to some of the families spending the Easter weekend on the streets as they claimed they had nowhere to go. However, the municipality said the people were offered alternative accommodation which they rejected.

The evicted families told this newspaper the houses were built in 2015 and left unfinished. Three years later, they claimed, they then decided to move in. They bought windows, doors and roofing materials to make the houses inhabitable.

An eviction process instituted by the city through the court has been ongoing for some time and the municipality was ordered to find them alternative accommodation.

According to municipality spokesman Themba Gadebe, the evictions were based on the latest court judgment that they could evict the illegal dwellers as they had secured emergency places for them to stay - a hall and recreation centre.

The city's plan would be fine if the country was not going through the coronavirus outbreak. It does not make sense for any government institution to remove people from individual family dwellings into halls when every day the same government is preaching social distancing. With 100 families in two centres it would be difficult to maintain hygiene standards too.

Yes, a court order was granted in the city's favour, but did the person who issued the instructions for the cops to carry out the removals not think that the main focus for government, citizens and everyone in SA is to contain the spread of Covid-19? Or was it just business as usual?

The families also told Sowetan yesterday they had been sleeping at taverns, taxi ranks and a fast food outlet at the nearest mall. Since the lockdown was announced, government has been housing the homeless, so removing people from state-owned structures and leaving them on the streets because they refused the accommodation offered seems like taking 10 steps back.

We call on the municipality to find an amicable solution that would leave these people in a safe environment. Our focus should be on saving lives during this difficult time in the world.

More than 100 families spent the Easter weekend on the streets after they were evicted from RDP houses they had been illegally occupying since ...
News
1 year ago
Next Article