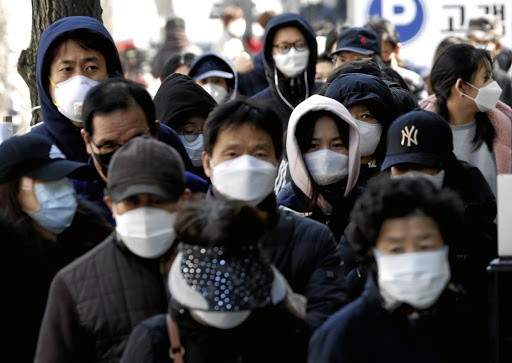 Images of people wearing masks and looking like they are from an alien planet can only feed into the growing blaming of people of other cultures and races for coronavirus. /REUTERS/Kim Kyung-Hoon

One of the scariest things about coronavirus is that unlike HIV, which takes years before it claims the life of the person who is infected, it is swift.

Because it is swift, having ravaged 92,000 people worldwide in the few months since it was first detected and identified, it is causing so much panic all over the world.

Coming as it does in a world that is afflicted with yet another disease, in this case a disease of the mind called xenophobia, coronavirus is likely going to be the grist to the mill of xenophobes and racists all over the world.

Take what happened two weeks ago in the town of Novi Sanzhary in the Ukraine. A convoy of six buses rolled into the town on their way to a sanatorium there. They were carrying 45 Ukrainians and 27 South Americans.

These people had recently been evacuated from Wuhan, the Chinese town which has been hit hard by the virus.

But as the convoy reached the bridge that would take them to the sanatorium, the drivers discovered to their dismay that the road had been blocked days earlier.

Now it was guarded by a group of angry rabble rousers burning tyres.

The moment they saw the buses, the rabble rousers fell on them with stones and other missiles. Windows were broken, passengers in the vehicles were injured. It took the intervention of the police to have the rabble rousers dispersed.

A 38-year-old South African man, who recently returned from Italy with his wife, has tested positive for the deadly coronavirus.
News
1 year ago

Incidentally, the attack on the convoy came just as there was, in SA, a growing outcry about the coronavirus and how it might affect this country.

The media had just revealed that there were over a hundred South Africans trapped in Wuhan. Now the debate was over the desirability of bringing the South Africans back home.

Many denizens of social media were of the opinion that these South Africans, regardless of whether they'd tested positive for the virus, should stay in quarantine in Wuhan. They should not be brought home with their "foreign disease".

The tenor of these social media messages were such that these South Africans, simply for being suspected of carrying the virus, had forfeited their nationhood. They had been tainted by the disease of The Other. They, therefore, should remain in the land of The Other.

One must commend our government for putting its foot down on the matter. Last weekend the government, in a clear demonstration of how proactive it wants to be in this matter, decided to repatriate the 151 South Africans from Wuhan. These returnees will be put under quarantine in Qwaqwa.

Some commentators have gone to the extent of suggesting that they should simply be executed.

Another commentator confidently claims the virus was manufactured in the West to "exterminate Africans". Yet the virus was first detected in China.

The virus is likely to thrive in many parts of our continent where there is a shortage of safe drinking water, which, in turn, is breeding ground for unhygienic behaviour such as failure to wash one's hands before eating.

So don't be surprised when locals start blaming new immigrants from the north of the Limpopo for the spread of the pandemic.