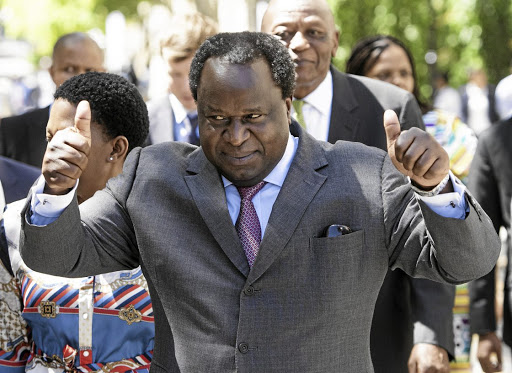 Finance minister Tito Mboweni's budget is a very decent start towards fixing the ailing South African economy. The problem is that we are good with ideas, plans and programmes in South Africa. We are terrible at implementing.

Can Mboweni's cabinet and ANC colleagues back him in implementing the tough measures needed to make it all a success? President Cyril Ramaphosa and his teams at Luthuli House and at the Union Buildings could start this important implementation phase by emulating Mboweni: he delivered a brave, sensible budget shorn of frills and populism.

The lack of frills and populism matter because we live in a world now where leaders - here and elsewhere - say whatever the taxpayer or the stakeholder standing in front of them wants to hear. Not so with Mboweni.

We are lucky to have him and the National Treasury still intact, even if they are limping after Des van Rooyen, Malusi Gigaba and Jacob Zuma tried to break that institution.

Mboweni managed to save taxpayers from what many observers had said was an inevitable personal income tax hike and a VAT increase. He did this while delivering a politically brave set of cuts to government expenditure.

That's not all. Over the past three state of the nation addresses, Ramaphosa has taken vague, poorly researched ideas from ANC conference resolutions and made them central to his programme.

The decision to try cutting the government’s runaway wage bill was a better available option in trimming down the state’s spending.
News
1 year ago

It is worth noting that resolutions taken by 5,000 tired delegates at an ANC conference which is all about who gets elected may not be subject to the sort of rigour that a nation may need to subject them to before they are implemented. Mboweni was courteous to his boss.

He mentioned these ideas and then promptly placed them in an abandoned parking lot. There is just no money for these frivolous adventures.

Two years ago, Gigaba was our finance minister. He was tasked with delivering a budget to save the nation. What did Gigaba do? He gave the poor he claims to represent a hot klap, hitting them with a VAT increase.

Mboweni, faced with a similarly widening revenue hole, chose to be brave. He is backing the rejuvenation of the SA Revenue Service. He is also going for the bloated, overpaid, entitled public sector, proposing a R160.2bn cut in the wage bill for state employees in national and provincial departments over the next three years. There will be a fight, of course. Labour unions will not take this lying down.

I covered Mboweni's negotiations with labour and business when he was labour minister in Nelson Mandela's government back in the 1990s. He was tough, sometimes arrogant, and totally engaged with the process of rewriting SA's labour laws. Talks broke down many times. He revived them again and again until the Labour Relations Act was signed into law.

SAA's business rescue practitioners have been granted another month.
News
1 year ago

What I enjoyed most about Mboweni's budget was that he kicked many of Ramaphosa's recent vanity projects to touch. Public hospitals have collapsed in most parts of SA, yet Ramaphosa has been going on about implementing the NHI as though that will be a magic wand for the public healthcare system.

Although the government will spend R229.7bn on health in the next year, only R55.6m in new funding is allocated to the department of health to "strengthen its capacity to phase in NHI". That, my friend, is not the phasing in of NHI. It's an allocation for "talks about talks".

Finally, another new entity that Ramaphosa flighted in the Sona was shot down. Mboweni said Ramaphosa's mooted sovereign wealth fund would be subject to a feasibility study that National Treasury was conducting. Basically, he put it in File Z, where all bad ideas go to die.

So it's the political battle with trade unions that has to be won. It can be won, but the fight will be hard.