Dr Mabuza: a man of the community 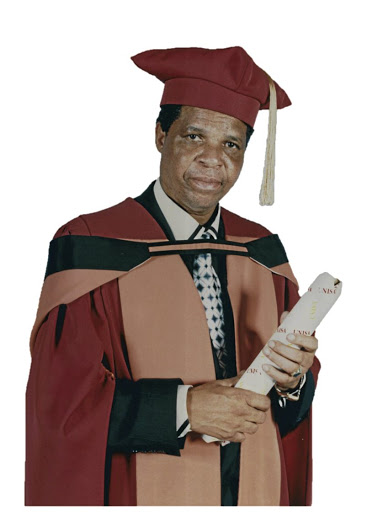 Dr James Khuthala Mabuza beat the odds of childhood poverty on the Mpumalanga farms to become a university professor.

Dr James Khuthala Mabuza, who passed away on Sunday at the age of 83, was a remarkable man, a loving family man and the personification of a community builder.

Born in Morgenzon, a rural town between Standerton and Ermelo in modern day Mpumalanga, Mabuza only started school at the age of 10. This meant that for most of his schooling years he often found himself the oldest pupil in class.

Yet this never embarrassed or discouraged him as he was determined to get his education. He went on to complete his high school education in KwaThema on the East Rand, where he would later make a name for himself as a conscientious school teacher.

His hunger for education proved to be insatiable. Mabuza would take yearly study breaks to go work in white people's gardens and cattle farms in Morgenzon, Bethal and Ermelo in order to raise money for his further studies.

He eventually qualified as a school teacher.

Mabuza had moved to KwaThema in the early 1960s and started his teaching career at Zamani Primary School in 1963. He was to later teach at Phulong Secondary before he moved to Phutla Secondary - now known as Kenneth Masekela Secondary School - where he became the first principal.

Mabuza specialised in mathematics and isiZulu.

So long, Sowetan. It's been an honour and a privilege

These past few days have felt like the end of an era for me. Just as I was preparing for what was going to be my final week as editor of Sowetan, ...
Opinion
1 year ago

Looking back at his career, he would often count the likes of business executives Mpho Lethlape, B3 founder Matthews Mogafe, soccer greats Nelson "Teenage" Dladla and Joseph "Skheshekheshe" Mkhonza and MMC Aunty Nyathela as having been among his many pupils.

His work as a teacher led to him being noticed by the then Randse Afrikaanse Universiteid [RAU], now known as the University of Johannesburg, which head-hunted him.

Mabuza worked at the university for 22 years and became the first black person to work in the African languages department at this previously whites-only university.

While at RAU Mabuza worked part time at the SABC on a Radio Zulu programme - Ezezikole - on which he did critical analysis of Zulu literature.

In 2000, at the age of 64, he obtained his doctorate degree through the University of SA.

SA is poorer without you, Ntate Maponya

When I first met legendary entrepreneur Richard Maponya during the fifth birthday celebration of Maponya Mall in Soweto in 2012, I didn't know that ...
Opinion
1 year ago

His dissertation was on the "Stylistic Techniques In The Short Stories of DBZ Ntuli".

Like Ntuli - an accomplished novelist, poet and essayist - Mabuza was also passionate about writing, especially in indigenous languages.

Over the years he has written a great body of work which includes drama, short stories and a novel. Much of it remains unpublished.

Outside of school and university environments Mabuza was keenly involved in the activities of his community and church.

Many of his neighbours speak fondly of how he was among the first to welcome them when they settled in the township for the first time.

In his own quiet way he often provided leadership and counsel to his community.

Mabuza is survived by his wife, Moroaledi Francina Mabuza, his son, Reverend Solomuzi Mabuza, daughters Nondumiso and Nomcebo as well as five grandchildren.

He will be buried this morning at Rynsoord Cemetery in Benoni, on the East Rand, following a funeral service that will be held at the Springs Civic Centre.

Imagine walking into a board meeting of a multibillion-rand company, greeting everyone in Tsonga and also getting to conduct proceedings in the same ...
News
1 year ago

Let's talk about the abuse of names as a political weapon

This weekend a friend reminded me of a Facebook post I wrote two years ago, just a few weeks after I joined Sowetan.
Opinion
1 year ago

Joseph Bhekizizwe Shabalala, 78, was a gentle natured international celebrity with humble beginnings in the countryside.
News
1 year ago
Next Article