Nothing progressive or revolutionary about destroying university facilities 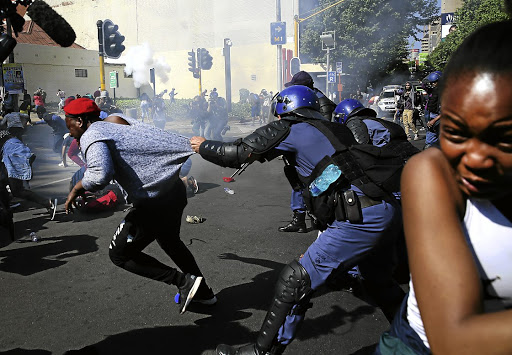 Heated confrontations with the cops marked the #FeesMustFall protests in recent years, but anarchy is destroying it all. /Alon Skuy

A few years ago, thousands of students across all higher learning institutions in the country took to the streets in protest against the exorbitant costs of higher education. I was one of those students.

Having been financially excluded by Rhodes University in 2013 while pursuing my undergraduate degree and knowing too well the pain and indignity of being from a poor working-class background, the struggle for free education was deeply personal to me.

I believed in the cause, both for myself and for others like me, students who were deserving of a place in universities, but who could not access it because they were born to poor families.

I have a distinct memory of #FeesMustFall, and it is a memory that haunts me all these years later. Just two weeks ago, I was co-facilitating an educators' workshop hosted by the Young African Leadership Institute (YALI) in Midrand, with a young educational development expert, Amanda Charles.

Amanda and I were seeing each other for the first time in nearly four years. We had met before in Johannesburg, at a meeting organised for "leaders" of the #FeesMustFall movement. She was from the University of the Free State and at the time, was the speaker of the Students' Parliament.

Student protests are spreading across the country as the SA Union of Students (Saus) intensifies the call for a national shutdown at public ...
News
2 years ago

Fuming parents want Gauteng education MEC Panyaza Lesufi to come and see for himself a dilapidated and vandalised school he posted about on social ...
News
2 years ago

Protest are spreading across the country as the South African Union of students intensify the call for a national shutdown at public universities. ...
News
2 years ago

At our recent meeting, we embraced and for some time, reflected on the unendurable pain to which we had been condemned during that time.

When she reflected on the night that armed police had come searching for her in her dorm room while she had a group of students hidden there, I almost broke down.

This is how we remember #FeesMustFall. It was bruising [and] psychologically damaging in ways that we have yet to fully articulate. So, for many of us, the attainment of free education for working-class students pursuing their first qualifications is a bitter-sweet victory that came at a painful cost. And people like Amanda and I are the lucky ones, because we were able to complete our qualifications and are leading productive lives. Some of our friends and comrades have been unable to, because the brutality of that process severely battered them.

It is for these reasons that today, as I follow the developments at the University of KwaZulu-Natal, where classes have been suspended for the past two weeks due to protests, my heart bleeds. In the last two weeks, infrastructure has been damaged at the university.

Students have vandalised and torched facilities - including an HIV/Aids support centre. These acts of arson have continued despite the university being granted temporary interdicts against students and persons founding to be inciting, organising and participating in the violent protest action on campuses. The students are demanding that historical debt be cleared so that students owing the institution can register and continue their studies.

The cause of students is legitimate - historical debt is a huge impediment to working-class students. But there will never come a day when I support the burning down of universities.

I argued all those years ago during #FeesMustFall and I will argue it until the day I die - there is nothing progressive or revolutionary about destroying public universities, no matter how angry and frustrated students may be. We risked our futures fighting for poor students to access these institutions.

The destruction of the infrastructure at UKZN goes against everything I believe in, and reverses the gains that students made a few years ago.

It is not and must never be legitimised as an act of resistance, because what it is, truly, is an act of criminality and a betrayal of everything we stood for.

Our country needs to develop a new language of protest. This habit of vandalising and torching facilities when we protest is regressive. We need to start thinking deeply about ways of engaging our problematic government, because if this kind of violent and anarchic behaviour continues, we will have no public facilities left for the poor. And then we will know what it means to be in a zone of non-being.