Let's talk about the abuse of names as a political weapon 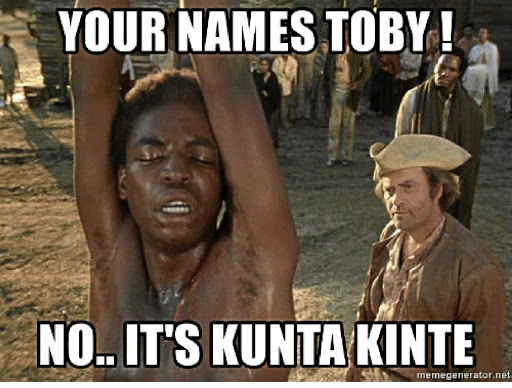 A scene from the series "Roots" where the captured African slave is whipped senseless for refusing to accept the name his American 'master' has bestowed on him, preferring to be addressed by his original name.

This weekend a friend reminded me of a Facebook post I wrote two years ago, just a few weeks after I joined Sowetan. It was on the habit to use people's names, especially black people's names, as "weapons" mostly in political fights.

I stated in that post that the matter has bothered me since the mid-1990s where, as a young reporter, I saw a group of protesting school teachers in Pietermaritzburg carrying a big banner that spelt the surname of the then KwaZulu-Natal education MEC Vincent Zulu as "Zooloo".

In a country, and a world, in which Africans were often called animals, described as less than human, I find it offensive that school teachers from a minority group would find no wrong with suggesting that the MEC had some relation to animals.

I also stated in the post that, some years later, I was shocked when a white leftist academic got a rousing applause from his largely black audience at an anti-privatisation march when he said the protesters needed to be mindful that the name Thabo, when read backward, can be read as Botha.

He was somehow trying to draw similarities between the then president Thabo Mbeki and the second-last apartheid president, PW Botha.

The EFF will appeal against the high court interdict that‚ for now‚ has halted the public protector’s remedial action against public enterprises ...
News
1 year ago

I added a more recent example, the insulting reference to ANC MP Tandi Mahambehlala by an EFF MP as "Mahambelahla".

I wondered aloud why some of us would find this acceptable given our colonial history and the fact that one of many ways in which our conquerors trampled on our dignity was to refuse to call us by our chosen names.

Why would we think it is "fair political game" to change a Zulu to a "Zooloo" or a Mahambehlala to a "Mahambelahla" when we know that, in most of our cultures a surname is not just a reference to that individual but an acknowledgement of a clan they are from?

I could have added other examples. For instance this newspaper, an institution founded by great and humanist editors such as Aggrey Klaaste, had a satirical columnist who insisted on referring to then social development minister Bathabile Dlamini by an insulting and insensitive, given her medical condition, name of "Badakiwe".

Yes political satire can be used to justify the most backward of prejudices.

I am glad to see the subject of how names are misused to spread hate and intolerance is now entering the public discourse. This is largely because of a continued reference to public enterprises minister Pravin Gordhan by his middle name, Jamnadas.

This is done by his critics, many of whom are either backers of the EFF or those who remain sympathetic to former president Jacob Zuma.

There has been a lot of writing recently about the usage of the minister's middle name as a form of "othering", a way of making him seem like an outsider or foreigner in the land of his birth.

The minister himself has not publicly objected to the use of the name but many of those sympathetic to him are suspicious of the reason behind its sudden use - especially given that throughout his public life, which spans decades, he was always known simply as Pravin or, to those in the Struggle, PG.

Do his critics use his middle name because they think it sounds more Indian and therefore foreign - in a bid to delegitimise the role he plays in our politics?

Could there be a link between the choice of the middle name, especially among those who insist on misspelling it as "Jamnandas", and the pejorative reference to South Africans of Indian descent as amaJananda?

Whatever may be the reason in this case, we need to learn to respect what names people choose to be called by, be they our favourite or not.

And we need to be consistent in this. While it is perfectly correct to call out those people who insist on calling Gordhan by his middle name when he prefers his first one, we should also be offended by those who insist on referring to Mzwanele Manyi as "Jimmy" even though he has long publicly dumped his "colonial" name.

While at that, we should also examine our tendency to "other" Zuma by persistently referring to him "as a man from Nkandla" as if this rural town is somehow not in SA.

We never refer to any other politicians original home as consistently as we do Zuma. Is it because Nkandla is in the backwaters of this urbanised nation?