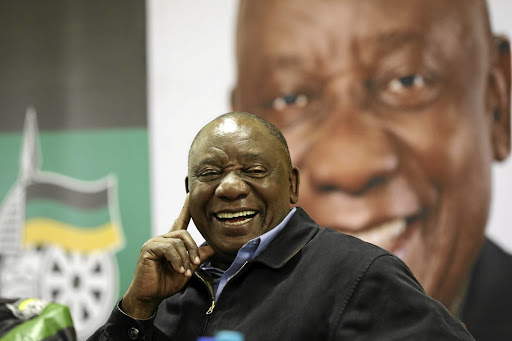 In his 2019 Sona, President Cyril Ramaphosa asserted that: "Now is the time to focus on implementation".

He said: "It is time to make choices. Some of these choices may be difficult and some not please everyone."

There is yet to be evidence of this unwavering decisiveness since then.

The noise surrounding former president Jacob Zuma's last term as president created the impression that his departure would lead to a quick turnaround to the country's problems.

If there's anything society should have learnt in the two years of a Ramaphosa presidency, it's that we need to disabuse ourselves of the idea of a Messiah president.

Ramaphosa was a big factor in the ANC retaining its majority in the 2019 general election. But it is becoming increasingly clear, given the state of the economy and the sociopolitical situation in SA, that the confidence placed in him by voters and analysts was perhaps misplaced.

Ramaphosa may have been a new president. But the ANC he leads is not a new party.

He may have returned a semblance of political stability, but economic and social indicators show a downward trajectory. We need to question the wisdom of placing confidence in a party that has run out of good ideas about how to place SA on an upward developmental trajectory.

At the time of taking over from Zuma, the ANC-led government faced a crisis of credibility. Ramaphosa was part of that government. He was there while the fifth administration ran SA aground, presiding over the mismanagement and looting of SOEs, and over the weakening of state capacity and oversight institutions.

Ironically, it was Ramaphosa who characterised the nine years of a Zuma presidency as the lost years, as if he was a mere spectator in the events of those years.

Nevertheless, he has enjoyed the goodwill of the broader citizenry as well as major social partners in the form of labour and business.

The results of the latest South African Citizens Survey, a study run monthly by Citizens Surveys, show that confidence in Ramaphosa remains high. With a rating of 61% he remains the most popular politician in SA.

I put it to Reza Omar, strategic research director at Citizen Surveys, that popularity is surely not a measure of effectiveness.

Omar said respondents were asked how favourable they are to a list of politicians, so this is about how positively they viewed politicians.

The survey also places the president's performance under the spotlight. It asked, "How well or badly do you feel President Cyril Ramaphosa is doing his job?" and 64% feel he is doing a good job.

In contrast to Ramaphosa's high approval rating, only 28% are of the view the country is heading in the right direction.

Trust in Eskom has declined. Also, the level of citizens' confidence in important institutions like the SAPS, NPA and the public protector have hit historic lows.

"Despite the problems, South Africans don't blame Ramaphosa for what is going wrong in the country."

These findings are intriguing. In SA we don't vote directly for the president but for parties.

The most significant take away from these survey results is that South Africans somehow distinguish Ramaphosa from his party and the mismanagement and corruption that have ensued under the ANC's watch.

Ramaphosa will need to leverage this confidence going into his fourth Sona since 2018, his most important speech yet.

The reality is that despite enjoying the support of business and labour, he has not been able to convince them to make critical trade-offs to restart the economy.

Tonight, the president has an opportunity to demonstrate that he has the courage to take the bold decisions necessary to secure SA's short- and long-term future.

The presiding officers Thandi Modise and Amos Masondo on Tuesday said that they were security measures in place to ensure that the president’s ...
News
1 year ago