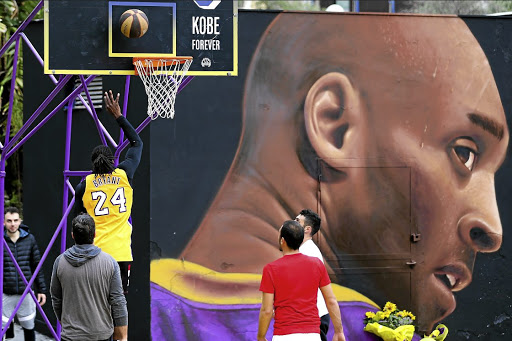 A group of boys play basketball, in the basketball court dedicated to the memory of the basketball player Koby Bryant, in the Montedonzelli district in Naples. In the background, the mural by artist Jorit Agoch dedicated to Kobe Bryant. /Marco Cantile/LightRocket via Getty Images

There are debates around the legacy of Kobe Bryant, whether he is to be remembered as a superstar basketball player or as a rapist. Personally, I think we do not have to choose, simply because human beings are complex.

So, we are at liberty to remember Bryant as the basketball superstar, amazing father and husband.

But we can also remember Bryant as a rapist. Because, as I have written many times before, in this newspaper - rapists live among us. Rapists are fathers, sons, husbands and successful athletes.

I think we have difficulty reconciling this fact because we are obsessed with sanctifying the image of prominent men. Even more so, when they have died. Women are told to hush it because "this is not the time" or they are told to not speak ill of the dead but when have women ever been able to speak freely on their plight?

It seems society is never ready to speak on anything women face, issues to do with women always take the back burner, there is always something else to discuss! I digress. Speaking on the divisive legacy of Bryant isn't the aim of this piece. My fellow social commentators have in the past weeks ventilated this matter.

I want to speak about the many other powerful, prominent men who are alive and have managed to continue with their lives, despite the crimes they are alleged to have committed against women. One even went on to become the president of our country.

A rapist died, and my heart broke into smithereens. The legendary, iconic and superstar basketball player Kobe Bryant perished in a helicopter crash ...
Opinion
1 year ago

That is how much impunity patriarchy lets men get away with. Powerful men, who are perpetrators of crimes against women, can be at the helm of a country. A country that is already in a war against gender-based violence, a country habitually referred to as the rape capital of the world.

One such man is former Orlando Pirates coach Milutin "Micho" Sredojevic. It is a shame that he was allowed to leave the country after an accusation of sexual assault was made against him.

Why is it possible that our systems allow such to take place? I cannot help but associate this with the power and connections some of these men hold and the continual failure of our systems to protect women and bring to book these men who benefit from patriarchy's stranglehold.

Danny Jordaan's rape case, what happened to it? Why is he still at the helm of the South African Football Association? Indeed, a person is presumed innocent until proven guilty, however, why is it that powerful men are treated with kid gloves when it comes to facing the music?

I have not met the woman who accused Sredojevic but what is instructive is that she is all alone, forgotten, and we have neglected rallying behind her. Sredojevic has gone unhindered and resurfaces in a new position as the head coach of Zambia's football association.

A few weeks ago, Danny Jordaan successfully clinched another term as president of the South African Football Association (Safa). This was despite ...
Opinion
3 years ago

Following the #MeToo movement, only then were women starting to speak against powerful men who had violated them. This is a testament to the fact that many women have no safe avenue to speak out on what they have been subjected to.

When these avenues do exist, such as reporting to the police or human resources when violated at work, many women have found that these avenues, in reality, are inadequate and lead to their further victimisation or blackballing that makes them unemployable.

Many women only found strength in numbers, they only spoke out because multiple women online were speaking out, sometimes against the same man who has been able to do this over a long time because he has never had to face the music.

Daily, women are not believed when they speak on the abuse they have faced at the hands of men. This is even more pronounced when the perpetrator is a powerful man.

The personal lives, careers, and images of these men go untainted, while the victims of their crimes live a life carrying this heavy burden.

A burden made even worse by the reality that it will likely never reach a resolution that sees their perpetrators having their day in court and face jail time.

Often women speak about how much society hates them. I think the ability of men to go on with their lives, with impunity, sometimes supported and protected by society, that women are indeed correct in saying that society hates them.

How we as people, institutions and even corporates respond to the plight of women justifies this feeling that women have.

The old saying "it's a man's world" proves to be true when one looks at the liberty powerful men get to hold onto in our society at the expense of women.

A Johannesburg woman who has accused former Pirates coach Milutin "Micho" Sredojevic of sexual assault says she's so traumatised that she can neither ...
News
2 years ago

Experts debate role of money and status in feeding the cycle of abuse.
Lifestyle
2 years ago
Next Article