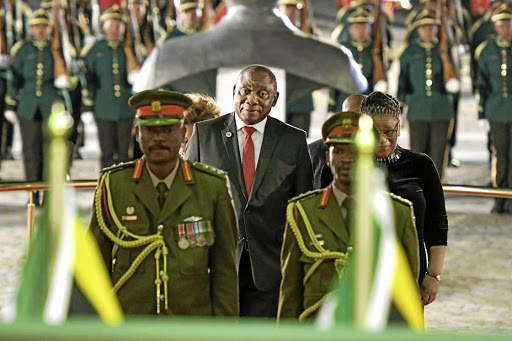 President Cyril Ramaphosa enters the National Assembly for his State of the Nation Address (SONA) 2019 in June . /Gallo Images/Jeffrey Abrahams

President Cyril Ramaphosa gets a lot of criticism for being indecisive.

As he enters his third year as head of state, many are looking at tomorrow's State of the Nation Address as an indicator of whether he will now start implementing some of the decisions he announced when he took over.

Already there is a lot of criticism of him, especially among his critics within the ANC as well as from business quarters. But what do key institutions that played an important role in elevating him to the presidency want to see in this year's Sona?

Two years ago, Cosatu and the SA Communist Party were among the parties who cheered when Ramaphosa announced an economic stimulus package that was meant to lead to higher economic growth and job creation.

The package included the re-prioritisation of public spending in favour of job-creating projects, the establishment of an infrastructure fund, focus on education and health, and investment in social infrastructure in municipalities. But since then, there has been no evidence of improved economic activity.

It is becoming harder for anyone to argue Ramaphosa is living up to expectations that his tenure would lead to economic stability and growth.

There is also frustration over his government's inability to bring to book many of those who were involved in corruption and state capture.

The presiding officers Thandi Modise and Amos Masondo on Tuesday said that they were security measures in place to ensure that the president’s ...
News
2 years ago

Many are saying what they expect from the Sona are timelines for the implementation of many laudable plans.

Yesterday, labour federation Cosatu told Sowetan Ramaphosa should provide the nation with an implementable plan on how he would quickly turn the economy around.

"We want a sense of plan regarding Eskom and other state-owned enterprises. We have a plan on the table as Cosatu on Eskom. But we cannot run the country. He and his administration have to give solutions," Cosatu spokesperson Sizwe Pamla said.

"All our SOEs are in trouble. if you were to look at the rescue plan for SAA, it does not inspire confidence."

He said the auditor-general was also telling a depressing story about how SA was losing 10% of the budget to corruption at municipalities, provincial and national governments.

"It is a big figure that has to go to service delivery. This is one of the many reasons why the workers are reluctant to endorse our plan to rescue Eskom [by using public sector pensions to pay off some of Eskom's debt]. We are running out of resources, Sona should give us a plan of action with clear outcomes," he said.

Pamla said although people were becoming impatient with Ramaphosa, he commended him for consulting before taking decisions.

President Cyril Ramaphosa is set to hold a youth dialogue on Wednesday ahead of his state of the nation address the following day.
News
2 years ago

"As workers we have seen the president listening to us even where there is serious opposition from within. We now have three members on the board of the PIC [Public Investment Corporation] because he listened," Pamla said.

SA CP spokesperson Alex Mashilo said it would be good if Ramaphosa announced an increase in public investment, key areas being education and social infrastructure.

He said the state needed to equip the Technical and Vocational Education and Training (TVET) colleges because they had a crucial role to play in creating SMMEs and jobs.

"They are underfunded unlike universities and need to be treated the same way as universities. We want the president to speak to a state-coordinated system that will make TVET colleges work."

Mashilo said public investment was crucial to grow the economy. "The economy grew in mid-2000 when we were building stadiums for the World Cup, that created a massive number of jobs.