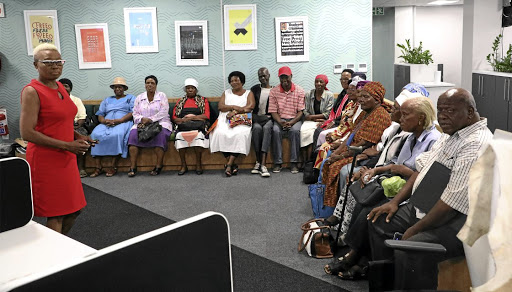 A group of senior citizens who worked at George Mukhari Hospital in the past are being addressed by Consumer Line journalist Thuli Zungu at Sowetan offices in Parktown, Johannesburg. / ANTONIO MUCHAVE

Its been four years since the state had agreed to compensate government employees who suffered financial discrimination during the apartheid era.

Seventeen former workers at Garankuwa Hospital (now George Mukhari Hospital) approached Consumer Line to air the frustration they encounter whenever they try to claim what they believe is rightfully theirs.

At the end of 2018, the Public Service Co-ordinating Bargaining Council (PSCBC) passed a resolution allowing for the closing out of the process which was started back in 2000.

The process was to compensate female teachers and other female employees who went on maternity leave and on return were admitted to the Temporary Employees Pension Fund and former homelands employees.

Abel Sibande, 59, of Soshanguve, north of Pretoria, said he and the other former George Mukhari Hospital employees were the victims of the 1992 striking employees. They were dismissed from work but later taken back between October and November the same year, Sibande said.

He said unbeknown to them they had forfeited their pension fund they had contributed before the July 1992 strike.

He further said some of them were admitted on the Temporary Employees Fund which was not reconciled with the pension fund they had contributed before the strike.

"As a result, GEPF [Government Employees Pension Fund] could not pay us what is due to us because of this discrepancy. R80bn was set aside to compensate the affected workers after protracted negotiation with government.

"Some employees have been paid. What about us," he asked.

The 17 employees who visited our office last week consist of former cleaners and cooks at the hospital until they retired.

They said they did not have resources to write to GEPF, owing to semi-literacy. This changed when Sibanda and Betty Kabini, who were shop stewards in 1992, stepped up and help revive the matter.

Sibibiliti Masuku, 87, who said she worked 25 years as cleaner, said her pension redress was approved and each time she inquired about her payment she was told it was being processed and that she must go home and relax.

" I'm tired of waiting. I wish to get my money before I die," Masuku said.

Baku Khoza, 70, also from Soshanguve, said she was a cook at the same hospital for 32 years and that she was owed pension fund of about 11 years from her contribution before the 1992 strike.

"I want to buy my coffin, pay my debts and make sure I die in peace," she said.

Jane Makgetwa, 81, said she was only paid a bonus and a monthly salary after a 22-year service.

"I was told strikers are not entitled to a pension payout and forfeited the one I contributed before we embarked on a strike," Makgetwa added.

Two health workers have been given the sack for stealing medicines for a range of illnesses including genital infections‚ mental problems and chest ...
News
4 years ago

Thoko Kheswa, 74, said her pension was placed on a Temporary Employees Fund since 1973 and still remained unpaid. She worked for 36 years and said it pained to leave her work empty handed.

Kheswa said she would pay off her bond and build a wall around her house as she was exposed to crime.

"Last July, I was awakened by thieves who had broken into my house while I was sleeping. I'm scared they might attack again," she said.

Steven Letwaba, 54, said he felt betrayed by the nonpayment of his pension.

In August 2018, Frikkie de Bruin, general secretary of the PSCBC, said members who qualified and have exited the system have to be "traced" in order to have their details verified for compensation.

This includes members who have resigned and the beneficiaries of deceased members.

"We availed ourselves and we are still not paid. What made them think they were entitled to my three years pension contribution? No matter how small it may be, I want it with accrued interest," Letwaba said.

Abel Baloyi, 60, said his father died without getting his pension fund and he too did not want a repeat performance.

"He died a sad man without his pension being paid. I am fighting two cases now, his and mine and GEPF must pay since they have approved both payouts," he said.

The list of the pensioners who approached Consumer Line include Lina Molope, 81, Alina Satshana, 78, Nomasonto Senamela, 75, Be Mgayo, 70, Lydia Molaudzi, 74, Catherin Msiza, 64, Violet Maloko, 83, Mmapokedi Tshukudu, 67, and Elizabeth Maluleke, 75, years old. Most of them expressed a wish to go on a vacation as soon as they get their pension payouts.

Ofentse Seleka of the Government Pensions Administration Agency said they will respond once they have relevant information.

GAUTENG's ailing health department is owed R2.2-billion in patient fees but senior officials are reluctant to recoup the money. It was left to the ...
News
8 years ago

Sassa employees from various offices in Gauteng will come together for a mass protest at the Sassa head office in Pretoria.
News
2 years ago

An agreement on wage increases for the public sector has been reached.
News
2 years ago
Next Article