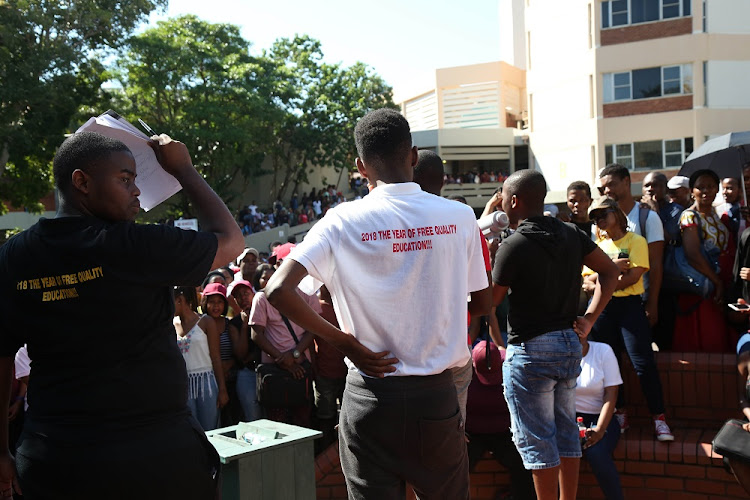 A few years ago, students across the country took to the streets demanding that the government provide free education to children of the poor.

We were committed to this cause and were all prepared to pay the ultimate price.

Even when our universities sent private security to unleash violence on us, we remained resolute in our demands. The militarisation of higher learning institutions did not weaken our resolve to fight the battle to its logical conclusion.

A few years later, the government announced that it would be providing free education to students from a working-class background, for their first qualifications. We were elated – our struggle had not been in vain.

Now, years later, I am sitting here wondering whether in winning this battle, we did not become too relaxed, and in the process, neglected the bigger war that was confronting us, and which today is proving to be even far bigger than the struggle for a fee-free education.

I am wondering whether even we understood that expensive education was the symptom, not the cause, of the monumental challenges that we were facing as students.

A few days ago, I received a desperate message from a student begging to be helped with money for bus fare. This student had been accepted to the University of the Witwatersrand, but was unable to get to the institution due to lack of transport money.

But he had missed orientation week and was about to give up on his studies all because he did not have transport fare. After assisting him and aiding hundreds of others, one thing became clear: we have a crisis beyond free education in our country. We have a crisis of institutionalised, generational and systematic poverty.

Dependants of military veterans 'had been blocked'
News
1 year ago

The plan for a national shutdown of public universities has been called off.
News
1 year ago

There are young people in our country who are so poor that free education is only half the battle won for them. They still require assistance to get to universities, because even just a few hundred rands for bus and taxi fare is an impossibility for them and their families. They simply do not have the money.

And even once at the universities, they still need to be assisted with obtaining the bare minimum groceries and toiletries while awaiting the National Student Financial Aid Scheme (NSFAS) to disburse their bursary allowances.

This happens weeks after they register, and the implications are devastating.

In the past few days, I have received the most heart-breaking messages from students who are sitting in university residences hungry. Some had not eaten in days by the time we sent them food vouchers.

Young women were asking for just money for sanitary towels and basic toiletries.

There are few things in the world that will tug at your heartstrings like seeing desperation in the eyes of a student. It is this that sent me to the streets to fight for free education a few years ago despite having been a beneficiary of scholarships and therefore not being directly affected by fee increments. I

t is a look that will haunt you – and one which our government is seemingly not too perturbed by, judging by the glacial pace with which it is dealing with some of these devastating challenges.

For one thing, despite years of complaints by students, NSFAS administration remains catastrophic.

No cause justifies use of violence

It is the start of the academic year at institutions of higher learning, and as is often the case, the period has been marked by student protests and ...
Opinion
1 year ago

The South African Union of Students has issued a stern warning to vice-chancellors not to suspend student leaders who participate in protests.
News
1 year ago

Why has the capacity of this funding institution not been strengthened so that it can do things with the urgency that is demanded?

In addition to this, a company owned by some social activists approached government with a proposal on how it can assist students with transport, by proposing that state-owned entities like Prasa aid in the provision of free transport to students.

For a few days, a small number of trains and buses would carry students to universities across the country for free.

The government has completely ignored this suggestion despite how significant it is.

Students in our country are being backed into a corner by the lack of political will on the part of our government.

The government has the authority to make certain demands on the private sector, such as a compulsory 0.5% levy from their profits to help students.

None of this is happening, and the result is that poor students are enduring unimaginable suffering.

This nonchalant approach to students is not helpful. The government should not wait for the country to be rendered ungovernable again before it realises that we have a crisis in our universities.