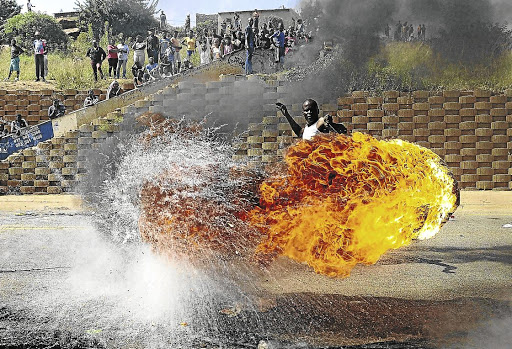 A protester swirls around a burning tyre during one of service delivery protests. The writer says political parties will need to convince voters next year on how they will turn things around.
Image: Thulani Mbele

Why is the ANC's cadre deployment policy such a contentious issue?

And why has the ANC national executive committee's decision to introduce qualification criteria for its public representatives led some to think the governing party will do away with the policy?

If the ANC recognises the damaging effects of its cadre deployment policy to governance performance and service delivery, why does it insist on retaining it?

The ANC's practice has been highlighted over the years as the primary cause of the dysfunctionality of state institutions and entities.

Notwithstanding the calls to do away with it, the ANC is unlikely to heed such calls.

Cadre deployment is core to the governing party. The trouble with its model is that it places loyalty to the party - or to the different factions vying for ascendancy - above competence and capability.

Moreover, it has given greater influence and prerogative to politicians and diminished the role and responsibility of public officials carrying out the administrative functions of the civil service.

It has also diverted the public administration from implementing policies and regulations, as codes of conduct and good ethical practice would require, to disbursing state resources to garner political support and gain influence over party structures.

A good example in the local government context is the role of the mayor as a political head and the role of a municipal manager as head of the administration.

There should be no undue interference from the politician in the functions of the administrator.

And the administrator should be appointed based on technical expertise, experience and competence.

The ANC's practice of cadre deployment has not respected this parallel coexistence between the political and administrative arms of the state.

It has instead used its policy to put politicians in administrative positions, all in the name of loyalty to the party.

By so doing, the ANC has politicised the public administration and has made it a prize in the party's factional battles.

It has also resulted in it being a target in the patronage system developed by party and alliance leaders.

The party bosses who have influence over the deployment of cadres into positions cannot just use merit and competence as their consideration.

They are instead incentivised to use it as a means to strengthen their own positions and those of their faction by rewarding certain comrades.

And through it, they guarantee for themselves and their allies in the party and without, preferential treatment in the awarding of state tenders and contracts.

The comrades appointed are then indebted to those who supported and ensured their deployment and are obliged to demonstrate their gratitude by doing favours.

It is in this context that the culture of nepotism and jobs and tenders for pals thrives.

And because the influence of politician administrators is recognised beyond party circles, they are able to run schemes such as selling posts, demanding bribes, from jobless and desperate community members.

Standards for a professional public administration already exist. But for a merit-based system to work, the ANC needs to provide an incentive stronger than the one that exists to serve narrow patronage and factional agendas.

Where in the world have you had a democratically elected government tolerating the blatant incompetence and corruption in such a critically important ...
Opinion
2 years ago

If government cut the number of managers in the public service by half, the country could immediately hire an additional 175,000 police officers, ...
News
2 years ago
Next Article