Castrating rapists is not solution to rape - a crime of power 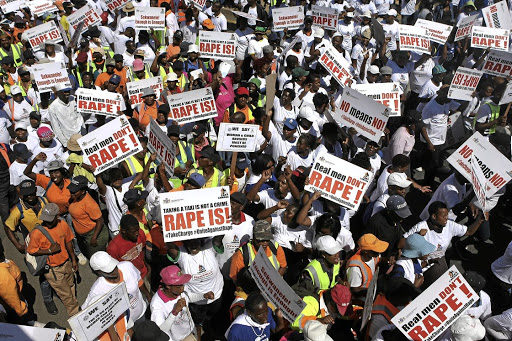 Members of the community, ANC Women's League, law enforcement and taxi officials protest outside the Southgate Shopping Centre in Johannesburg against the rape of women by taxi drivers in March.
Image: Sandile Ndlovu

I do not believe in violence. When the ANC Women's League made calls for the chemical castration of rapists following the vicious rapes and murders of young women in our country, I was one of the first people to criticise their argument.

I argued then, as I still do now, that chemical castration is not the solution to rape because rape is fundamentally a crime of power.

So, merely castrating their penises, the tool that they use for domination, does not address the deeper underlying causes of rape. In fact, some of the most heinous sexual assaults in history did not require the use of a penis.

Let's take for example, the case of Russia's most notorious serial killer, Andrei Romanovich Chikatilo, nicknamed the Butcher of Rostov.

He sexually assaulted, murdered, and mutilated more than 50 women and children over a period of 20 years. In his first recorded murder, he attempted to rape a nine-year-old girl, but failed to achieve an erection.

"It's time that everyone takes up women's issues seriously. We are not numbers we are human beings."
News
2 years ago

When the girl struggled, he choked her and stabbed her three times in the stomach, ejaculating while stabbing the little girl.

In another murder, he bit off a woman's nipples while ejaculating. Chikatilo was impotent, he could not achieve an erection. And so, by his own admission, he was able to achieve sexual arousal and orgasm only through stabbing and slashing women and children to death.

Sexual violence, through the use of tools other than a penis, is more common than people realise.

In a report that she did for the United Nations on sexual violence and rape in war-torn Syria, Sarah Chynoweth found that not only was rape being used as a weapon of war, but that young boys and men were being anally raped and sexually violated with the use of sticks, bottles and other weapons.

It has happened many times in SA too, particularly to lesbian women in the townships who in the early 2000s were being raped and murdered in attacks that were as vicious as they were devastating.

So, the idea that merely castrating rapists will resolve the rape crisis in our country is flawed not only because violence begets violence, but because rape is not about a penis.

I found myself reflecting on this at the weekend after reading the story of one Siyabulela Thembela, an Eastern Cape father who is incarcerated for the murder of a man alleged to have raped his nine-year-old daughter.

Thembela's daughter had informed him that she had been raped by the man, and the enraged father subsequently confronted the accused, beat him to within an inch of his life before pulling out a knife to cut off his penis.

In his own words: "I was angered to see a dick even bigger than mine, having been in my nine-year-old".

As I read Thembela's story, I found myself enraged, not only by the rape of a little girl, which has become commonplace in our country, but by a system that has allowed men to consistently do this to us and to our daughters.

As we draw close to the trial, I hope as a country we will pause to reflect not just on what Thembela did, but on the cruel situation that drove him to breaking point.

The ANCWL wants Parliament to adopt laws allowing convicted rapists to be forced to undergo chemical castration.
News
3 years ago
Next Article