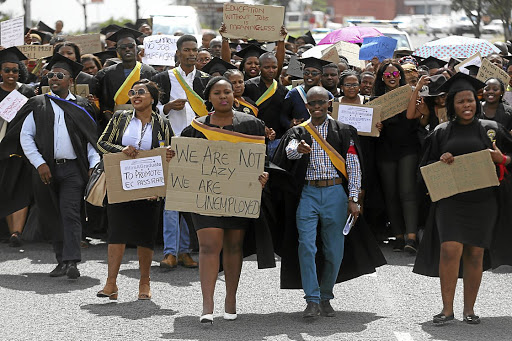 Many young people growing up in contemporary SA who have overcome myriad hurdles to learning to finish school and get a university degree or two have become disillusioned. /SIBONGILE NGALWA

Academic achievement is important, no doubt. But it is no guarantee for success.

Growing up, I was told you go to school, get good marks, go to university, get a good job and have a great life.

It sounds pretty straightforward, right? But this thinking assumes and implies certain conditions in society while at the same time concealing the fact that success is not linear.

So, as the excitement over the top achievers of matric 2019 subsides, it is time for sober reflection.

"Education is the key to success." This phrase has become a mantra. It is used to encourage children to take their schooling seriously because it is the only way to improve their lot in life.

Many young people in contemporary SA who have overcome myriad hurdles to learning to finish school and get a university degree or two have become disillusioned.

Education for them has not been a path to a great job and a great life.

How to best prepare for your tertiary education

For those who have done well who have the privilege of coming from middle class and affluent families, it will be more straightforward to convert academic success into career progression and high earnings. Academic prowess is only one factor that determines social mobility and an upward trajectory in life.

This is especially the case in a country like SA where prospects for young people are diminishing as evidenced by high unemployment rates and a shrinking economy.

The idea that it's all about merit assumes an equality of odds and terms. SA society just does not fit that bill.

Academic excellence and performing better than the rest do not necessarily translate into selection for an opportunity. Competition is stiff. There is high demand for jobs and opportunities that can lead to a better life, but there is scarcity of supply.

In the absence of political will at local and national level to turn the situation around, the prospects of a poor child don't improve drastically despite their great academic performance.

A government that fails to use its control of the state to effect policies and execute the kind of governance that promotes greater equality has grave implications for the poor and their children.

The government has the power to alter dynamics of wealth creation and distribution, either for the benefit of the few or of the majority.

Joseph E. Stiglitz, winner of the Nobel prize in economics, puts it more saliently in his book The Price of Inequality: "Government can affect the extent to which an individual's education and inherited wealth depend on those of his parents."

A Dihlabeng District Municipality official who was accused of falsifying her qualifications to land a plush job in eastern Free State has provided ...
News
1 year ago

In SA, the reality is that the government continues to perpetuate the historical situation where one's socioeconomic position depends directly on his/her background. Upward social mobility is not a given.

Escaping a past of poverty hinges more on how networked you are - whether politically, socially, corporately. It's really about who you know and who knows you, and less about what you know. It's not enough to let your CV and academic profile speak for itself, as a young person.

It is important to assist disadvantaged youth to navigate this context. It is not enough to just tell students to study and do well. The importance of building relationships across social strata must be underscored.

Let us teach young people to be gap spotters and to take advantage of opportunities as they meet people even at seemingly inopportune times and places.