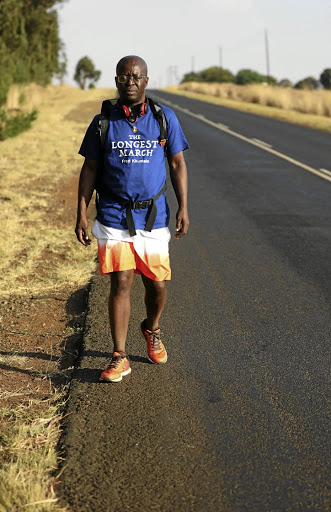 Fred Khumalo, author of 'The Longest March', embarked on his own march from Joburg to Ladysmith in KZN. /ANTONIO MUCHAVE

To a child, 10 years is a lifetime. To a grown-up, it's like blinking.

I can still smell the meat and feel champagne bubbles dancing on the tip of my tongue as we celebrated the arrival of "Philip" in 2010.

If you don't know what I am talking about, you clearly are too young to know that the bestowal of the football World Cup to SA was accompanied by the slogan "feel it, it's here!"

Township folk, always ready to squeeze a morsel of humour out of every moment, turned the slogan into: "Philip is here!"

At a personal level, the decade was a whirlwind. A year after the World Cup, together with my wife and three kids we packed our bags for the United States where I'd be studying at Harvard University, my wife attending the same institution while the kids went to schools in our new suburb of Belmont.

End of 2012 we were back. My kids had American twangs. My wife and I didn't. Our friends said: "Two years in America, no twang! What a disgrace!"

Then in 2013 I lost my job at the Sunday Times. I was one of the six top editors to get the boot. It was claimed we were too old and too expensive for the company. Not one of us was above 50.

The whole affair was ugly. The "young'uns" who replaced us were fired en masse after they messed up the infamous SARS rogue story. I'll tell that story one day. In book form.

At any rate, having lost my job, I was too sore and distrustful to seek employment. I'd published four books by then, as a hobby. Now I thought I should take my writing game to a higher level.

In 2014 I started writing Dancing the Death Drill, honouring the 646 men who died when their ship, the SS Mendi, sank in the English Channel in 1917.

The book came out in 2017, was prescribed for English 1 students at the University of KwaZulu-Natal (Pietermaritzburg), and adapted for the stage by Isango Ensemble of Cape Town. The play opened at Southampton in the UK the same year.

The following year it was performed at the Royal Opera House in London, and then in Australia. This year I was invited to a performance in Norway.

As a result of the resounding success of the book I was suddenly getting invitations to give talks at universities and private companies here and abroad: Beijing Normal University in China, UJ, Stellenbosch, Durban Marine Museum, etc. And yes, I get paid to speak.

It was embarrassing to be referred to as "Prof." or "Doctor" when the highest qualification I have is a master's. So, in 2019 I registered for a PhD. This year, in addition to working on my doctorate, I published four books, bringing to 11 the number in my oeuvre.

The peak of the madness was when, in October, I walked from Johannesburg to Ladysmith. It took me 10 days. I walked to mark the release of my book The Longest March which commemorates a march by 7,000 Zulus, mainly men, who walked from Jozi to Natal in anticipation of the outbreak of the Anglo-Boer War in 1899, 120 years ago.

But I also walked as a motivation to myself: I have thought hard enough about it, therefore I can do it. Mind over matter.

The moral of this column: you lose your job, and you think it's the end of the world, isn't it? As Bob Marley said in Jamaican English, "when one door is closed, many more is open".

As we wrap up this year, analyse Marley's words. There are opportunities crying out for your attention. You just haven't seen them for what they are. Focus.

Many South Africans were bemused when British Prime Minister Theresa May took time to hand over a church bell to our president.
Opinion
3 years ago

Author and journalist Fred Khumalo began a long march on Monday to commemorate 7,000  Zulu men, women and children who walked from Johannesburg to ...
News
2 years ago
Next Article