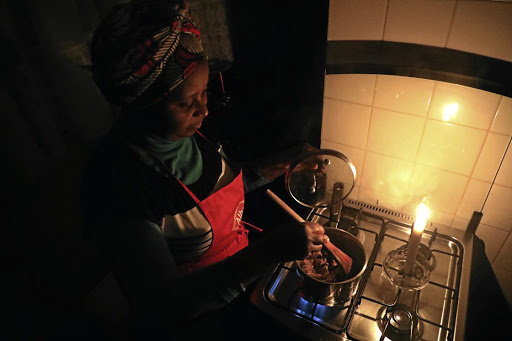 A Roodepoort resident cooks with a gas stove while using a candle for light during the stage 6 loadshedding in the town west of Johannesburg. /ANTONIO MUCHAVE

The ANC is back at the helm in the City of Johannesburg after the DA-led administration was dissolved at the resignation of Herman Mashaba.

It is ironic that the party responsible for the loadshedding has been rewarded with another opportunity to run Johannesburg.

Given that the city is the economic hub of SA, it is among the hardest hit by the failures of power generation.

Yet, the new ANC executive mayor has promised to make Johannesburg run better. But this is the same governing party at national level that has not made good on its commitment to address the power crisis in the country.

There is no way that successive ANC administrations including the current one, led by President Cyril Ramaphosa, have been serious about restarting the economy while doing nothing about energy generation.

In his weekly letter to the nation Ramaphosa wrote: "When I visited Medupi power station for the first time two weeks ago, I was struck by how massive it is. It is one thing to be told. that . Medupi will be the fourth-largest power station of its kind in the world; but it is quite another thing to stand below its towering turbines."

It does not inspire confidence that following years of generation problems at Eskom and complications with the construction of Medupi that the president only visited it for the first time this year.

Could it be another issue to add to his list of surprises about how dire the situation is in the country?

It is not enough to placate the nation with reassurances and plans. What is required now is action, not rhetoric.

Ramaphosa cut short his visit to Egypt. That might signal the seriousness with which he is approaching the most recent spate of loadshedding. This ongoing loadshedding crisis not only threatens to plunge South Africans into longer periods of darkness, it could also be the death knell to the country's economic recovery.

Any hope in delivering on the promise of jobs and a better life is fast fading if it has not already diminished.

There are many difficult questions that the ANC-led government needs to answer as to how things have been allowed to deteriorate to such levels. It's not enough to take collective responsibility. To take anything the president and his cabinet ministers say seriously, we need to see individuals taking responsibility.

In the early 1990s the ANC declared itself ready to govern. Twenty-five years down the line, that has become more doubtful.

The Presidency has confirmed that President Cyril Ramaphosa has cut short his two-day trip to Egypt and is on his way back to South Africa.
News
2 years ago

There has been talk of sabotage. I myself have entertained the idea that economic sabotage is a possibility. At this point I think it's appropriate to ask whether the ANC is just a case of self-sabotage?

Is it that the ANC by design is intent on running the country down or is it really the case of good intentions paving the way to hell?

It would seem that incompetence coupled with insatiable greed and corruption has led to the abandoning of morality servant leadership in the ranks of the governing party.

Where individuals wield power, responsibility and accountability are not far behind. As the saying goes, with great power comes great responsibility. The ANC's notion of collective responsibility is a perversion of the obligation power imposes, that of accepting blame and taking on the consequences.

But the ANC is not alone in the problem. SA's opposition parties and electorate have created the context for the ANC to be complacent.

That the ANC can walk in and out of power in metros as well as win consecutive general elections despite governance and leadership lapses reinforces the lethargy with which it approaches the country's challenges.

The ANC continues to be rewarded despite the crises it has failed to lift the country out of. Nevertheless, the party of liberation has been given another chance in Joburg. May it do better by the people of this country.

A few days just short of two weeks ago SA inaugurated Cyril Ramaphosa for what is viewed as a proper start to his presidency.
Opinion
2 years ago

There is no doubt that, given the options before the electorate, Cyril Ramaphosa was the best bet for South Africa to survive after the ruinous years ...
Opinion
2 years ago
Next Article