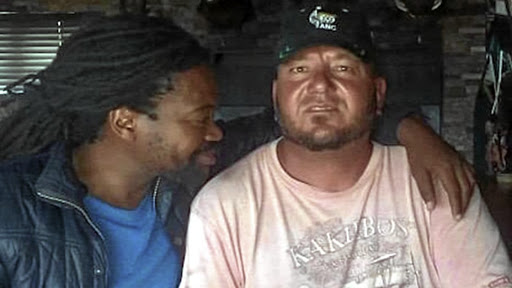 It's amazing how easy it is in this country to resort to the silliest, shallowest commentary over something as profound and deep as racism.

I think you can already guess what has inspired me to write this column. The one part of the commentary relates to a black man captured on CCTV mugging a Chinese woman in Cyrildene, Johannesburg.

When the footage went viral, social media was aflame with comments alluding to the fact that the black man was a xenophobe. Turns out that the man, who has since appeared in court, is actually a Zimbabwean national.

The second part of the commentary relates, of course, to the murder of Anele Hoyana by Fritz Joubert.

The video shows repeatedly Joubert bludgeoning Hoyana, while ranting: "You sit on your knees for the white man, for the white farmer."

It's a chilling video that inevitably sent people scurrying to their racial laagers.

Killer Fritz Joubert was fired from police 'after too many deaths'

Fritz Joubert was allegedly fired as a policeman when he was 21 - and was out on bail on a robbery charge at the time of his death last weekend.
News
2 years ago

It's a good thing, however, that the video is out so we know that these callous murders with racial undertones still take place in the country.

As can be expected, the video has been grist to the mill of people who refuse to think.

Listen to this line of thinking by some of them: when the Springbok team brought home the bacon, SA, black and white, rallied behind these heroes.

We were a happy nation, black and white.

Why then, these commentators argue, would white people then turn around and start killing black people. It goes to show that the "Springbok Unity" is a sham.

Yes, that's the tenor of the conversation that's taking place on social media.

You're being outrageously silly if you assume that a moment of unity behind a national rugby team that happens to feature a sprinkling of black players is an indicator that racial animosity is a thing of the past.

Yes, sporting and cultural activities do create opportunities for a racial toenadering. But these are far and few between. A Springbok win cannot suck out the poison of racism that is deeply embedded in our racial bloodstream.

It goes beyond argument that those who have been at the receiving end of racial hatred - both physically and psychologically - were black people. The laws of the land were racist, thus laying foundations for racism in all sectors of life.

But it is short-sighted and dangerous to suggest that white people should therefore be tarred with the same brush simply because one of them has killed a black person.

We have in the past dealt properly with racists such as Vicki Momberg and Penny Sparrow. The precedents set in their cases should be standard in our gallant moves at quelling racial hatred.

At the height of the Momberg saga we did not go on a witch hunt and start attacking white people indiscriminately.

That would have been counterproductive and would have undone all the gains - such as they are - that we have made at trying to engender a sense of racial tolerance.

While it is true that there is a lot of unfinished racial business in this country, we cannot afford to reduce everything to race. We can do better. We can aim higher at alternative ways of how we can heal this sick nation of ours.

We have a strong constitution, which is the country's supreme law.

It does not countenance racial or other prejudices. It is forward looking, it is hopeful. Let us use it.

Let us show the racists that we are not wallowing in the gutter with them. We are not barbarians.

'A young child left longing for his father': a family's pain after brutal death of Anele Hoyana

As the family of slain sangoma, Anele Hoyana, still battle to come to terms with his death, his brother Olwethu told TimesLIVE that his two-year-old ...
News
2 years ago
Next Article