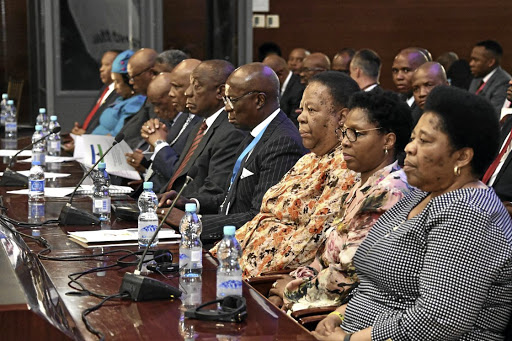 The actions of the department of international relations are based on our well known and well established South African foreign policy decisions and directives. These derive from various white papers, including that of 2015, from resolutions of the African National Congress and cabinet deliberations on matters that may arise from time to time.

The essence of SA's foreign policy is drawn from its embrace of the principles of human rights, democracy, international solidarity and cooperation, as well as a steadfast belief that multilateralism in global affairs is absolutely critical for a peaceful and secure world.

Key within the domain of human rights is our belief in the inherent equality and dignity of all, a rejection of racism, tribalism, religious intolerance and all form of unjust discrimination.

President Cyril Ramaphosa is out in London with his team hard at work presenting a case for SA and the continent as attractive investment ...
Opinion
1 year ago

While the criteria described above shape our actions and interventions, our government has also been consistent in its attention to the decisions of regional continental and multilateral institutions in which we enjoy membership.

For example, SA has steadfastly held to our belief that all remaining vestiges of colonialism on the continent must come to an end. That is why we are among countries that continue to insist that it is intolerable for the people of Saharawi to continue living without their desired freedom and autonomy.

We continuously call on the leadership of Morocco to act on agreed resolutions of the United Nations and the African Union by taking concrete actions that will ensure freedom for the people of the Arab Democratic Republic.

Our leadership has fully adhered to commitments assigned by SADC such as the search for peace, security and lasting stability in Lesotho. The launch, last week, of the National Reforms Authority of Lesotho and the facilitator role played by President Cyril Ramaphosa are illustrative of our foreign policy that stresses peace and security in Africa as priorities for ensuring our continent's development.

Our foreign policy goes well beyond our continent's policy agenda. SA has not ever deserted its traditional solidarity with the people and government of Cuba.

The Cuban people sacrificed life and limb in the course of our struggle and we have worked alongside them, providing support in a context where many, including old friends have shied away.

Even in the most recent events in Nicaragua, Chile, Bolivia and Venezuela, we have voiced objections to externally imposed regime change efforts and called on political foes to pursue dialogue and joint negotiations to develop nationally agreed solutions.

We have stated these views in open debates at the United Nations and in closed bilateral meetings.

The subject of Palestine is one that has enjoyed much attention from our government and the ANC.

We remain seriously concerned at the plight of the people of Palestine and at the ongoing diminution of all of the elements that could secure peace and a viable two-state solution.

We have asserted our belief that the Security Council should do much more to advance the cause of the suffering people of Palestine and security for Israel.

These views have been stated very openly in open debates, including within the Security Council.

It is clear to all with an interest in foreign affairs that the terrain of foreign policy and international relations has become increasingly complex and challenging, thus it is almost impossible to have a static set of approaches as the dynamics change daily.

Even in such a complex context, we have held on to our belief that we should strive for a better world, that armed conflict, terrorism and abuse of civilians can never be supported.

'They are killing us. They are making it impossible for us to live in peace'
News
1 year ago

As government, we follow this attention to SA's interests steadfastly.

This includes our continuing discussions with the USA about the deleterious effects of the tariff battles with China and other countries.

In that interaction, we seek the best outcome for SA and the entire continent.

Finally, Africa and its peaceful progress and development are at the heart of our policy and will remain so.

It is our intention to play a more proactive role in enhancing our peace-making role into a partnership for stability and sustainable peace.

We have agreed to work closely with post-conflict partners to address the underlying conflicts that are obscured by armed conflict.

Moreover, we are keen to see collaboration in fighting the insidious practices that deny Africa resources especially corruption, illicit financial flows and a tendency to arms rather than peaceful resolution of issues.

The destructive effects of climate change and their role in increasing conflict in communities also must form a firm part of our foreign policy partnerships.

I stress partnerships because all that Africa must do in its interactions with the world requires well-defined partnerships strategic execution and a level of integrated action that has not been achieved over many decades.

SA has a well-crafted foreign policy and many of us are hard at work executing it, follow our actions and statements and do offer advice, not unfair criticism.

We know too that financial ability exerts a powerful force in international affairs even on agreed decisions and actions.

It is vital for us to pursue our policies and objectives fully alert to changing balances of power and complex constraints.

*Pandor is a minister of international relations and cooperation

Like a number of South Africans who are enraged by basic education minister Angie Motshekga's planned grade 9 certificate, Dr Mamphela Ramphele is ...
Opinion
1 year ago

Crime statistics released by the South African Police Service last week showed an increase in the number of murders and sexual offences.
Opinion
1 year ago

Who pays when you get sick on a business trip?

As your mental bandwidth is taken up with details of meetings and budgets, you might not give any consideration to your medical cover in the event of ...
Business
1 year ago
Next Article