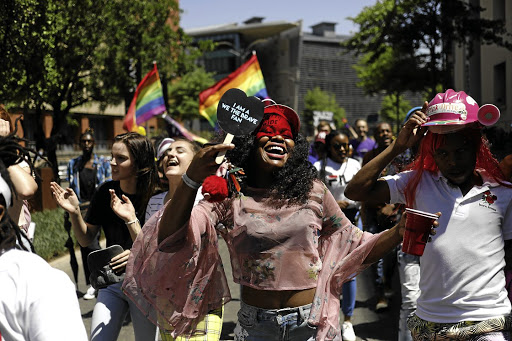 Pride marches can be happy events but in reality the safety of queer people is a big concern. /ALON SKUY

Uganda is once again in the spotlight for its human rights abuses, particularly its proposed imposition for citizens found "guilty" of being gay.

Soon after the news of the possible reintroduction of the anti-homosexuality bill spread, Deputy President David Mabuza was under fire following his comments in the National Council of Provinces (NCOP) that "we must be decent enough to keep our mouth shut", when he was asked about the reports, and rightly so.

Of course, he may argue that his remarks were premised on the principle of state sovereignty and non-interference in international affairs, but a government cannot remain mum when there is a clear violation of human rights.

Respecting a state's sovereignty does not necessarily come with a force field of non-responsibility, especially when SA prides itself on being the leader of the continent.

Unfortunately, Mabuza's comments did not come as a shock. South Africa and Africa as a whole have a problem of homophobia. Uganda may have made the news a few weeks ago, but homophobia in Africa is pervasive and alive.

Some African countries may not have gone as far as passing anti-gay bills, but homosexuality still remains largely stigmatised, and proponents of the anti-gay lobby argue that to be homosexual is counter to our African values.

But what does it mean to be African? I choose to use the very same argument of "Africanness" to highlight the irony of being African and homophobic.

The African nguni ubuntu, loosely translated as "humanity towards others", best highlights this irony. The word ubuntu embodies virtues that build harmony and the spirit of togetherness.

Nearly all Malawians think LGBT+ human rights should be protected, yet the same number could not accept a gay or lesbian family member, according to ...
News
2 years ago

Furthermore, as a continent whose "being" was violently distorted through violence and oppression, when will we realise that our hatred for apartheid and other forms of oppression is not consistent with homophobia, since homophobia is also premised on the hatred of the "other". Why, then, do we call out one form of hatred and not the other?

We seriously need to conduct introspection and ask ourselves why the world, particular Africans, hate gays and lesbians so much that we make laws that do not advance the protection of the LBGTQ+ community?

I have always argued that rights are not indivisible, meaning that we cannot be selective when it comes to ensuring that individuals' rights are protected. Freedom, by its very nature, is something that all of us have embraced in SA and we as a country have a history of violence.

This notion of heteronormativity is dangerous to the body politic of our country, and its pervasiveness causes more harm to our constitutionally enshrined rights. This is why we need to collectively hold each other accountable.

Religious and traditional leaders have a critical role to play. They cannot just look away and fold their arms as if it is business as usual.

Our educational structures also need to come to the party. Our children should be taught about inclusivity and anti-homophobic behavior from an early age. It cannot be normal that we consciously bash and dismiss homosexuality in the 21st century.

I hope that as we begin to observe the beginning of 16 Days of Activism, we will also focus on the violence that we inflict on those we deem inferior.

Botswana’s governing party wins tight election. But biggest tests are yet to come

The Botswana Democratic Party, which has governed the country since independence in 1966, has retained power in one of the most competitive elections ...
News
2 years ago

While many might be juggling their allegiance between Ocsober and Ocsoze, this also happens to be the official pride month in South Africa.
SebenzaLIVE
2 years ago
Next Article