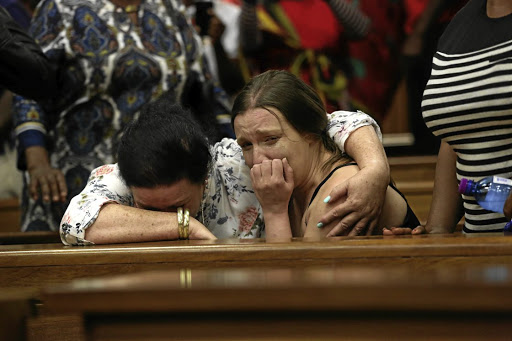 Pauline Gericke and Chantelle Ninow could not hold back their tears as the judge delivered his sentencing on the charges that Nicholas faced. /Thapelo Morebudi

There was a great uproar in the country regarding the interview. Many thought this was a clear case of white privilege in action, that the interview was insensitive to the victim and her family, and it was tantamount to secondary victimisation.

The internet does not forget. The little girl will not only have the rape ingrained in her memory forever, but her horrid ordeal will live on, on the internet - forever.

I agree with the criticism of the SABC. There was no consideration of the impact this could have on the victim and her family.

What the interview did is perpetuate the idea that when a white man has committed a violent crime like rape, we need to investigate further because, essentially, white men do not rape. The interview also said to South Africans that when a perpetrator is white, they are likely to get a greater platform for their voices to be heard, hence the interview is seen as a perpetuation of white privilege.

The probing of his life sanitises Nicholas Ninow, in that there must be a bigger reason that is worthy of the country to know, a reason that can somehow explain why this man committed such a horrid crime.

The Broadcasting Complaints Commission of South Africa has dismissed complaints against the SABC over its airing of an interview with the mother of ...
News
2 years ago

There have been many other rape cases, but we are yet to see the family history of perpetrators being probed and family members being given exclusive interviews, in order to rationalise what terrible life circumstances have contributed to them being rapists.

This interview implicitly says that the face of rape is a black man, thus we are overly interested, invested and intrigued when it is a white man. The unintended consequence of such interviews is the sanctification of a person who really is despicable, which is ironic because our apartheid history tells us a story of white men using their power to rape black women.

I am not racialising rape. I am, however, showing that there is a level of bias in reporting that also happens to be ahistorical.

If the aim was indeed to understand why men rape, there are experts in the field who can offer insight into the matter - without giving a voice and legitimacy to the perpetrator.

Additionally, if the aim is to have a nuanced understanding of the kind of upbringing of perpetrators of acts as horrid as rape, where are the many other voices of black mothers who are in the same shoes as Nicholas Ninow's mother?

Despite the many google searches of weather conditions, I am shattered by the grey thick skies that envelope us as we descend into Germany.
Opinion
2 years ago

There is a section of society that believes this interview was important because humanising the perpetrator forces us to face the reality that perpetrators are people who live among us. Rapists are fathers, brothers, sons and uncles. Rapists are not strangers or monsters.

The truth is Chantelle Ninow is not the only parent who will believe their child is not a rapist, or that it was a mistake. Many of us know of scenarios where rape has been concealed because "he is a good man" or "he wasn't himself".

Nicholas, his family and his history being at the centre of this case reminds us why there is an under-reporting of rape by victims. They are likely to be left unheard by society.

As little as the girl is, she has been subjected to the harsh reality that many women face in SA and that is the insistence on showing sympathy to men who rape, because there must be a bigger reason why. They raped because of what you were wearing, because of alcohol or, like Nicholas, because they are bipolar.

The Broadcasting Complaints Commission of South Africa may have dismissed complaints received from the public, regarding the SABC's broadcast of the interview.

This does not, however, absolve the SABC for its tone-deaf and insensitive broadcast. The perpetrator should definitely not be the centre of the story.

Nicholas Ninow was handed a life sentence after being found guilty of raping a seven-year-old girl at a Dros restaurant in September 2018.
News
2 years ago

Dros rapist Nicholas Ninow has been sentenced to life imprisonment.
News
2 years ago