Gweezy ought to roar with rage at counter-revolutionary comparison 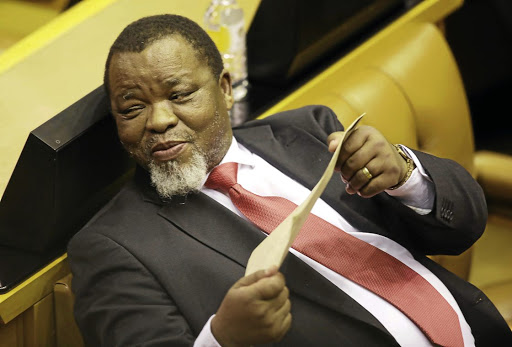 Mineral resources and energy minister Gwede Mantashe has changed his statement and says he did not actually pay a bribe to two journalists.
Image: ESA ALEXANDER

The first time I saw tigers having sex I was traumatised and scandalised, in equal measures.

My wife and I were sitting side-by-side, mesmerised by nature's magical moments, on National Geographic.

When the male tiger lunged at the female, we involuntarily, instinctively held hands. The male was swift, the sinews on his shoulders stood out as he pinned his mate to the ground. The female lay on her stomach, in supplication.

There was a spasm of movement as the male went about his business. Then he raised his head to the heavens and roared. Then he got up.

My wife and I unclasped our hands. I think it was my wife who laughed first, a long, deep, head-thrown-back howl of laughter. Then I joined her. She said: "After all the aggression, and so much promise of action, he is done!"

"He lasted probably less than 45 seconds!" I joined in.

The image of the self-confident tiger pinning his mate to the ground came back to me this week when social media went on fire, after minister Gwede Mantashe's paramour told the Sunday World how she had been conquered by Uncle Gweezy, and how the minister was a "tiger in bed".

Women on social media teased men, asking them to find the tiger in themselves. If only they knew how truly scandalous a tiger is when it comes to bedroom acrobatics.

Name, shame 'Tigers' old enough to be our dads

It's pretty clear that eight out of 10 men will cheat on their wives.
Opinion
2 years ago

Mantashe, being the well-travelled and well-read man that he is, is probably not taking the comment by his erstwhile sex mate as a compliment. I am positive he has watched a tiger in action, on National Geographic or other nature channels.

I can see him confronting the woman: "Comrade sleeping partner, what you said to the media is completely counter-revolutionary. Do you know what a disgrace a tiger is in matters of the bedroom? It's a 30-second wonder. I'm a minister of energy, I can't be a 30-second wonder? In the interests of the National Democratic Revolution, you have to withdraw."

And she interrupts: "I must withdraw? Have you already deposited money into my account? Oh, thank you, sweetheart!" Mantashe retorts: "I meant you must withdraw the statement that imputes that my bedroom game is that of a tiger!"

To me, had the woman likened Breezy Gweezy to a horse or a donkey, I would have been shamed into silence.

I think there wouldn't be any of this hilarity on social media. But a tiger? Oh, what a laughable image.

On a more serious note, I am not one of those Mother Grundys who are "disgusted" that the minister had sexual relations with a woman who's not his wife, a woman "young enough to be his daughter", as some have said.

In all of this excitement about tigers, alleged control freaks, slay queens and brown envelope journalists, Vera would like you to spare a thought ...
Opinion
2 years ago

The woman is of a consenting age. Gweezy is a powerful randy man. What happened to them was a transaction. You pay, you eat, you roar, you go home.

Where I have a problem is Gweezy admitted that in an attempt at killing the story he paid two Sunday World reporters a bribe. He's since changed his statement lightly, saying though he claimed to have bribed the journos, he actually did not pay them.

Criminal charges must be levelled against him. Not only is a minister of government, he is also chairman of the ruling party.

An example must be made of him. I can see people throwing their heads in paroxysms of laughter, saying: "Where does this madman Khumalo come from? Doesn't he know that ruling party bigwigs are immune to prosecution?"

Perhaps my roar of anger right now is as empty as that of a tiger while having sex. But I hope that one day my voice will be as effective as a horse in action.

The SA National Editors’ Forum has called on minerals and energy minister Gwede Mantashe to verify under oath whether he bribed journalists to bury a ...
News
2 years ago

According to a news report by Sunday World, mineral resources minister is "a tiger in bed" after allegedly giving Pretoria slay queen Lerato Makgatho ...
News
2 years ago
Next Article