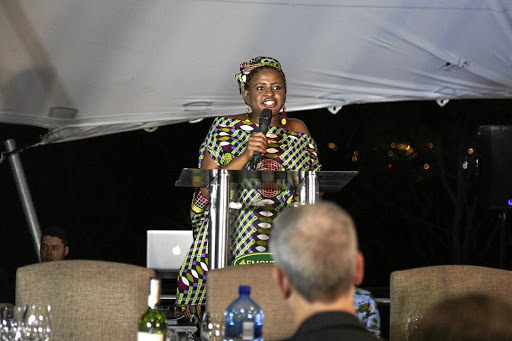 "A critical, independent and investigative press is the lifeblood of any democracy. The press must be free from state interference.

"It must have the economic strength to stand up to the blandishments of government officials. It must have sufficient independence from vested interests to be bold and inquiring without fear or favour.

"It must enjoy the protection of the constitution, so that it can protect our rights as citizens."

I just quoted the words of our revered late stateman Nelson Mandela - reminding us of the importance of a critical and independent press as the cornerstone of our democracy,

The reality is that the lifeblood of our democracy is under threat, it is fighting for it's economic survival and pushing back on what appears to be an orchestrated campaign to silence investigative reporting exposing the greed and ills of our politicians.

Yes, today we gather to remember the heroes of our liberation struggle - those who used the might of the pen to risk their lives so that today we can be free to speak truth to power - protected by our celebrated constitution.

Joe Thloloe reflects on the state of journalism

From atop a hill at his home in Constantia Kloof in Roodepoort, veteran journalist Joe Thloloe has been observing a storm sweeping through the media ...
News
2 years ago

We honour the men and women who despite the real danger of the evil regime, said we will force into the open the atrocities of the apartheid government.

It is the 42nd anniversary of Black Wednesday - when the Nationalist Party government attempted to silence the media by banning newspapers and organisations that were part of the Black Consciousness Movement.

They also arrested the prominent journalists who dedicated their lives to dying by the pen.

October 19 1977, became known as Black Wednesday - triggering years of resistance and what is now our fight for media freedom.

A blogger celebrating the life of Percy Qoboza, who was the editor of The World newspaper that was shut down on that day, quotes him saying: "We were an angry newspaper. For this reason we have made some formidable enemies, and my own personal life is not worth a cent.

But I see my role and the role of those people who share my views as articulating, without fear or favour, the aspirations of our people. It is a very hard thing to do."

We are facing new threats to our freedom - some of the threats are the very communities we serve that quickly turn against us... They attack us because often their legitimate causes are hijacked by criminal elements who steal our equipment to avoid being splashed on television looting bottle stores.

It has become all too familiar that a journalist will expose a politician's wrongdoing - and the response won't be to the report or to the relevant bodies and authorities available - but instead these journalists will be attacked and insulted. They are labeled "loyal racist members of Stratcom".

Stratcom - after the apartheid agency that was tasked to carry out disinformation campaigns - at the height of apartheid. Allow the weight of that label, in democratic South Africa, to sink in!

Reporters are now called "dogs of war"... the enemy whose head must be cut off .

SABC cries foul after threats are hurled at its journalists

The SABC has condemned threats directed at its journalists, saying they need a "safe space" in which to work without intimidation.
News
2 years ago

Journalists are now victims of online violence, targeted especially as women reporters; the lynch mob on social media frequently uses sexualised language such as "slut", "whore" "bitch and are regularly threatened with rape.

It's an all too orchestrated campaign to threaten journalists into silence - create that chilling effect where journalists begin to self censor by ignoring stories implicating politicians in wrongdoing.

We should all be concerned as all of it is to weaken the lifeblood of our democracy.

The threats are not only on Twitter - they land on our phones... in our hands.

In April this year, I received this troubling WhatsApp message from a prominent politician. Part of it read: "We fought for our freedom and we lost many lives. Dialogue came when our enemy had no other choice.

"Freedom of speech will happen when you patriarchal capitalists will no longer run the streets. Our fight is a just one, we will win this. You are respectfully entitled to be right-wingers I have chosen not to be one of you."

I have been called a number of things . a white monopoly stooge, described as a helpless woman with no thinking capacity but I have to say right wing, putting me in the same grouping as Eugene Terreblanche was just taking it a step too far.

We are facing a difficult time but we dare not falter - we have to draw on the strength of the journalists of yesteryear - who risked all to be the voice of the aspirations of a nation.

Raymond Louw, a former editor of the Rand Daily Mail and Sunday Times, chair of the South African chapter of the Media Institute of Southern Africa ...
News
2 years ago

Our armor should continue to be our ethical, factual and balanced reporting.

The reality is that apologies on major political stories, allegations of journalists being bribed, stories being planted have not helped our cause.

But we are hoping that the Satchwell inquiry into media ethics will hold us all accountable and more importantly contribute to strengthening ethical, quality journalism as we rebuild the trust relationship with our communities.

Ensuring a critical, independent and investigative press that Nelson Mandela called for - is not only the responsibility of journalists, academics and media freedom activists or just Sanef - but corporate South Africa also has to contribute.

We thank you for continuing to support our cause and your presence here shows your commitment.

We, however, believe you should be doing more. especially when choosing where you spend your money.

Newsrooms are shrinking because advertising revenue has declined drastically due to tough trading conditions, technological disruptions and a weak economy.

Companies are spending their advertising budgets with Google and Facebook - and the sad truth is that that much-needed revenue is not filtering into our newsrooms.

Public Protector Busisiwe Mkhwebane flayed the media for being biased, took a swipe at political analysts and said "judges are fallible" on Friday.
News
2 years ago

The scary figures revealed by the state of the newsroom report by Wits University show that journalism jobs have halved in 10 years; a decade ago we had 10, 000 employed journalists but today we have only 5,000.

What does that mean to diversity of views - choices for the consumer - telling the whole South African story?

The reality is without ads all of the mentioned sections will suffer, threatening our democracy. We estimate that 80% of all online advertising goes to these foreign companies who don't even pay tax in this country.

The other danger is cooperates unknowingly funding fake news.

This week I saw a fake news post that was widely circulated... it had a headline that screamed: "I slept with 1,400 girls, impregnated 600 in
6 African countries, French tourist recounts."

I counted at least six adverts by local companies in this fake story - a mobile company selling their fibre connection, an exclusive resort in Kwa-Zulu Natal, and a consulting firm that promises to resolve your troubles with your municipal bill.

This story is sensational but we know the role of fake news in American elections and corporate SA must take a stand.

Choose the trusted news platforms when you spend your money - it is these brands that exposed state capture, that shine a light on corruption and called to account those who were responsible for the death of Life Esidimeni victims and the thievery of Steinhoff or the VBS bank heist.

With newsrooms becoming younger and younger - this much-needed revenue from advertising - could also contribute to training of journalists.

We need journalists who can read annual financial reports, understand what it means when we say Eskom threatens our survival as a nation.

As you dig deep, remember Mandela's words that the critical media which is the lifeblood of our democracy must have sufficient independence from vested interests to be bold and inquiring without fear or favour.

*Mahlase is Sanef chair. This is an edited version her speech at its Black Wednesday gala dinner last Friday.

It is not helpful to debate with self-appointed media critics inside and outside the media about media ownership without an ounce of knowledge as to ...
Opinion
2 years ago

The South African National Editors’ Forum (Sanef) on Friday condemned several incidents amounting to intimidation and bullying of journalists in the ...
News
2 years ago

Condolences continue to pour in for veteran newspaper photographer Herbert Mabuza who died in hospital on Sunday after a long illness. He was 61.
News
2 years ago
Next Article