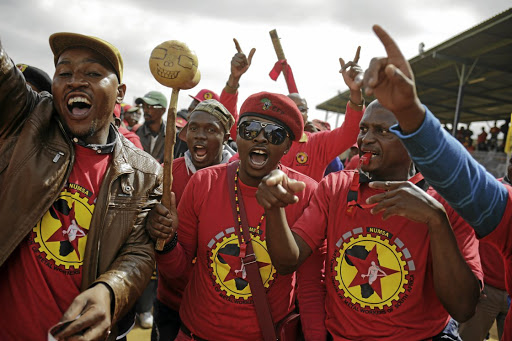 Thousands of Numsa workers enjoy May Day celebrations at Mehlareng Stadium, Tembisa. The union has given its members plenty of cause for celebration. / CORNELL TUKIRI

It was a blessing in disguise when the National Union of Metalworkers of SA (Numsa) broke away or was expelled from struggling trade union federation Cosatu in 2014.

Numsa is in its best shape and going from strength to strength. Cosatu, on the other hand, continues to bleed members but fundamentally it has done nothing for its members or labour in general lately.

To be fair, however, research does show that union membership has generally been declining globally since the 1980s for various reasons, including an increase in unemployment.

Numsa has recorded massive success for its members and labour in general, despite the difficult climate. To be more precise, the union's 2018 victory in the Constitutional Court over labour brokering in general solidified the important role that trade unions play in labour relations. The landmark judgment strengthened temporary or contract employee rights.

This win was crucial in the fight against labour exploitation that can be rife during times of high unemployment when people are desperate for work.

Exploitation of thousands of workers through labour brokers and company contracts has gone on too long.
Opinion
3 years ago

In a nutshell, the apex court ruled that a temporary or contract worker becomes employed by a company once three months have lapsed, provided the worker earns less than R205,433.30 per annum.

This was a blow to employers who have always sought to minimise employment costs and reduce risks associated with full-time employment.

However, are temporary employees who meet the requirements aware of their rights that have been cemented by the Constitutional Court?

The answer is no.

For example, I have a friend who has worked in the media industry as a freelance subeditor for years, let's call her Margret.

Margret works shifts - 40 hours per week, to be exact. She is a dedicated employee, sadly without the benefits of a full-time employee.

But temporary or contract workers are not always unaware of their rights.

Significantly, they may not want to assert their rights for fear of rattling their "employer", as a temporary worker is easily replaced, most of the time.

Research by the department of labour found that temp employees are paid significantly less, having no security of employment to speak of, but government has not banned labour brokering, despite its disadvantages and calls to this end.

A ban may be warranted because an employee with no security in their employment can be left destitute in vulnerable times.

Women, in particular, are made more vulnerable because temporary or contract employees accrue no maternity benefits, for example, which brings me to my next point. Findings by a recent gender survey (Career Junction) found that fewer than two out of 10 women receive full pay from their employers when they go on maternity leave.

This is because under labour legislation, companies are under no legal obligation to even pay full-time employees during their maternity leave; mothers must instead claim maternity benefits through the department of labour.

However, there is a cold reality of claiming through the Unemployment Insurance Fund (UIF): the amount mothers receive may be less than a fraction of their earnings. For temporary employees, it is worse - no maternity benefits exist.

When a female temp cannot work, she does not get paid and will not be able to claim UIF during maternity leave anyway. This calamity persists despite Numsa's victory for temporary workers.

But go on and tell someone who may not comprehend their rights to fair labour practices fully.

The National Union of Mineworkers (Numsa) has hit out at ArcelorMittal SA (Amsa) for allegedly informing the public about retrenchments before ...
News
2 years ago

Voting the party is like turning another cheek.
Lifestyle
3 years ago

President Cyril Ramaphosa has vowed that his government would continue to tighten the noose around corruption.
News
3 years ago
Next Article