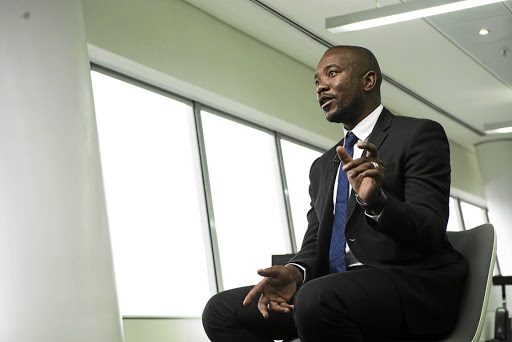 A scandal was just what Mmusi Maimane's detractors needed to entangle him in a web of controversy that would, in their estimation, end with him having to vacate his position, the writer says.
Image: Waldo Swiegers / Getty Images

DA Leader Mmusi Maimane has come under increasing pressure and scrutiny since the DA's poor showing at the May 8 polls.

The 2019 general elections was the litmus test of the effectiveness of his leadership of SA's most successful opposition party.

The question was whether Maimane would ensure that the DA continued on the trajectory of growth that entailed, attracting more support from among the country's black majority?

This loss, although significant, is marginal in the bigger picture.

Maimane's leadership is not the biggest threat to the survival of the DA as his opponents in the party are arguing.

Since taking over from Helen Zille in 2015, Maimane has had to fend off scepticism about his capacity to lead.

He has also had to contend with claims that he is not in control of the party but is a puppet with other senior members and party donors pulling the strings in the background.

Coincidentally, the DA's less than terrific performance at the polls is the perfect pretext to launch an onslaught against his leadership.

It is unsurprising that his detractors within in his own party jumped at the opportunity to rubbish their leader in the wake of revelations of inconsistencies in his parliamentary declaration regarding his home and his use of a car donated by disgraced former Steinhof CEO Markus Jooste.

A scandal was just what they needed to entangle Maimane in a web of controversy that would, in their estimation, end with him having to vacate his position to save face and in the name of protecting the party from reputational damage.

Maimane's tenure as DA leader has exposed the deep cracks in the party and has challenged the party's commitment to widening the parameters of white liberalism.

Maimane has spoken boldly and openly about white privilege, about the need to embrace a transformation agenda that includes accommodating a policy like broad-based black economic empowerment (BBBEE).

Maimane says DA review is 'not a referendum' on leadership performance

DA leader Mmusi Maimane is standing his ground, and remains resolute that an organisational review he instituted following the party's electoral ...
News
2 years ago

By doing this he has risked alienating the erstwhile white liberal support base of the DA.

Part of the analysis shows that the DA lost support of conservative white voters to the Freedom Front Plus.

This is not the full story.

The DA's poor performance is more the function of polarisation, discontent with the political system and a disillusionment with centrist positions rather than solely that of Maimane's leadership.

The DA was among a number of ideologically middle-of-the-road parties who saw electoral decline.

These include the ANC, the UDM and Cope.

These are parties that have wavered on taking a hard line on supporting the interests of certain communities against others.

But politics, the world over, has increasingly become the ground of a proxy battle between the haves and have nots of society. And it is the case in SA as well.

Hence the DA's slogan, a South Africa for all, has very limited appeal to voters.

There are very few South Africans who feel that the country is for all. The DA has to grapple with this stark reality if it is to ensure its ongoing relevance.

Maimane's opponents would rather get rid of him than be compelled to face this fact.

It is easy for finance minister Tito Mboweni to say people should pay for services.
Opinion
2 years ago

Former DA leader Helen Zille is adamant that she can bring back "unity and stability" to the party.
News
2 years ago