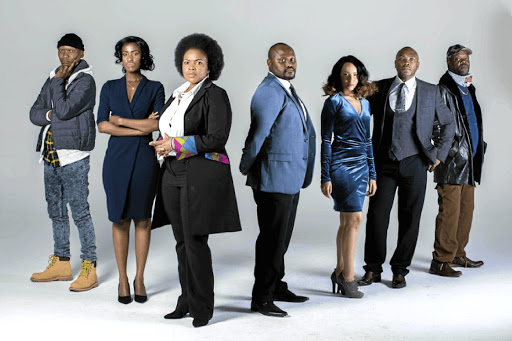 The cast of 'The Republic', in which the writer, third from left, plays the main character.

Oh, to be a South African actor! Can one even begin to describe it? Well, Vatiswa Ndara bravely did just that as she penned an open letter to the minister of sports, arts and culture Nathi Mthethwa earlier this week.

I have no intention of going through the full detail of the letter as it's been more than adequately unpacked by the many "industry gurus" on social media.

Also, do I want to be sued? No, I'm not in the mood. I'm just a villager and an actor from Venda with a mouth on me. For me, the letter scraped at a wound I had learned to ignore. I had reached a point where I told myself that most issues that dealt with the plight of the South African actor can't possibly be allowed to always steal my sleep.

After all, I felt I had sacrificed far too much in my pursuit of legislative reform for the audio-visual performer in SA.

See, in September last year I convinced my friend Basetsana Kumalo to accompany me as I embarked on one of my most taxing assignments as an actor in this country.

I had, with all my faculties present, written to the parliamentary portfolio committee on trade and industry, asking them to listen to my contribution and thoughts on the Performers Protection Amendment Bill.

We had complained for far too long about the dire conditions that we find ourselves working in as actors. At the forefront of my mind was actor Tony Kgoroge's one-man battle against M-Net in the late 2000s.

He was not prepared to sign a contract that gave away his performer's right to royalties and residual remuneration.

Please note that albeit miniscule, the SABC back then (I can't vouch for the current lot) used to stipulate a commercial exploitation clause in the contracts of all freelance actors in a drama.

This guaranteed lead actors a set percentage of their original fee to be paid should their work be rebroadcast on any platform. This clause does not exist in any MultiChoice contract. Kgoroge sought to fight this and change the scene for all of us.

He didn't get a lot of support. He lost. We remained stuck with a situation where this particular broadcaster could not be convinced or forced to put a repeat fee clause in their contracts. There was no law forcing them to do so. There still isn't such a law.

Tackle issues in the acting industry

We welcome that actor Vatiswa Ndara spoke out about problems affecting artists in the entertainment industry, and hope she will not be victimised for ...
Opinion
2 years ago

I dragged my best friend to hold my hand that day to ensure that our late legends get their dignity restored.

We celebrated the news that the bill was passed by the National Assembly in December last year. It was a big deal. In March this year the bill came before the National Council of Provinces. Again, actors made their voices heard in full support of the bill. The members of the house heard our cries and passed the bill.

Why am I rambling on about all this? Ndara and many others who might be feeling like they have no hoots left to give would not need to be writing open letters to Nathi Mthethwa if the president could just show leadership on this long overdue matter.

He can accept the bill, reject it or send it back to parliament on constitutional issues. We have not been told what he intends to do. Whatever your move, Mr President, the actors of this country are wondering if you care about them at all. Hear us, see us. Don't ignore our plight.

The acting industry is not all glitz and glamour that it appears to be from the outside.
Entertainment
2 years ago

Local TV production company Fergusons Films, owned by power couple Shona and Connie Ferguson, have for the first time broken their silence over iGazi ...
Entertainment
2 years ago
Next Article