Meeting royals got me thinking about celebrity selfies 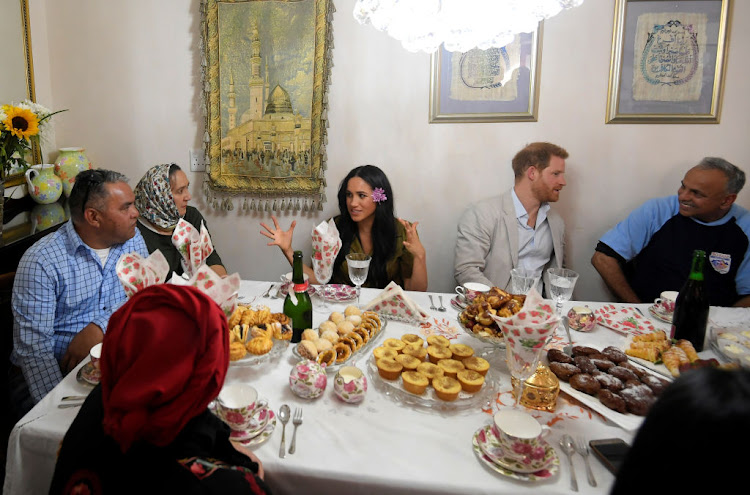 The royal couple popped into a local resident's Bo-Kaap home for a cup of rooibos tea. 'They were just happy to visit a home, meet the people and sit around a table having a conversation,' said their hostess, Shaamiela Samodien.
Image: Toby Melville - Pool/Getty Images

In 1997, Elton John performed a rewritten version of the song Candle in The Wind as a tribute at the funeral of Diana, the Princess of Wales. The song had been written many years before in the wake of the death of Marilyn Monroe.

I hadn't really cared about the British royal family until that moment in 1997.

When I heard the lyrics, it had felt as though Candle in The Wind was all the words I didn't know how to form over the death of my mother, who herself departed at a very young age the year before.

Everything I have followed about the monarchy since then has been because I have always believed that there was something in common about the life of the young princes and I: we're the motherless lot.

Years later, I was delighted to open my email two weeks ago to discover that the pleasure of my company was being requested at a reception party in honour of the Duke and Duchess of Sussex.

On the day, I woke up early in time to pass by the lady who does my make-up before the event. I must tell you at this point that I am very happy that I did not make a fuss about what to wear.

We got a sense of just how top-notch this event was when we got chauffeured in Land Rovers from the parking to the entrance. Some of us have only ever enjoyed this service on a golf cart.

The Duke and Duchess of Sussex and their baby son, Archie, flew back to the UK on Wednesday after spending a few days in Cape Town and Joburg, as ...
S Mag
2 years ago

The second we arrived, I began to spot some of SA's top names. I wanted to go back immediately. If those people were there, there was no way little old me would even get anywhere near the couple.

But I did not. I was pulled into the "chosen" designated groups that would get to meet one half of the royal party and my group got to spend some time with the Duchess.

However, we spent so much time waiting, in the end the real great connections made were with the ladies with whom I was waiting.

And it got me thinking about how we go about life jostling and bustling to have selfies taken with celebrities and other famous people.

How we are so easy to pay for a ticket to an event because a certain celebrity will be "appearing" and not for anything that they symbolise to us. Is there any real value and or meaning to it?

While we love the Duchess of Sussex, we weren't always moved by what she wore during the royal tour of SA
S Mag
2 years ago

People pay obscene amounts of money to have celebrities appear at their weddings. Why, when you and your partner should be the main focus? What value do you get from posting a selfie with a famous person? Unless that person was a friend of yours? Or that the two of you had any real connection?

Often people will disturb celebrities during a meal so they can get their selfie.

Does proximity to celebrities make us celebrities? What is in a celebrity?

The British royals will tell you that there is absolutely nothing to rate about South African celebrities.

There were no greetings and no selfies. They said their speeches from high up where they live and left.

I wonder how many of those who took pictures and videos as they spoke have lied about "meeting the royals".

And they would because it would give an illusion about their own fame. We are a generation that idolises people just because it's Monday.

Royal thumbs up for Tshepo jeans

Local fashion designer Tshepo "The Jean Maker" Mohlala, known for his eponymous tailored denim label, thought he was being pranked when an order came ...
Entertainment
2 years ago
Next Article