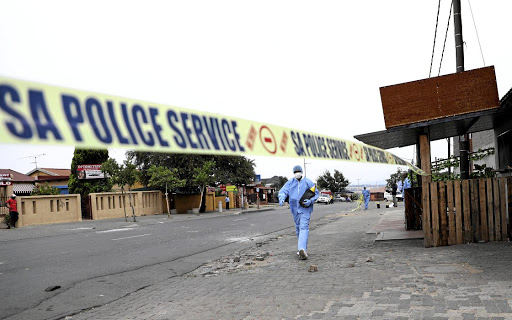 Xenophobic violence was addressed primarily as a crime issue as well as an international relations affair. The economic cluster was not engaged and remained invisible.
Image: SANDILE NDLOVU

Crime statistics released by the South African Police Service last week showed an increase in the number of murders and sexual offences.

It is now general knowledge that SA is a violent society. The annual stats only indicate the intensity of violence from year to year.

If there isn't a combined and global response to crime as well as the political and socioeconomic problems, SA risks further erosion of state legitimacy and democracy as well as complete breakdown of the rule of law.

If SA is likened to a workplace, it would be an organisation operating in silos. Government and society alike are identifying the same challenges to SA's present and future prosperity.

Responses are often uncoordinated with civil society and the government engaging in disparate initiatives and only embracing the necessity of synergy at the release of alarming statistics or at occurrence of tragedy and disturbing levels of violence.

Given the proven correlation between violent crime as well as other social ills and income and wealth inequality, should these challenges not be tackled to address all factors?

There simply does not seem to be a holistic and overarching approach to solving the problems.

A good example of silos is the approach to the economy and labour relations.

There is Nedlac (National Economic Development and Labour Council) which is a platform where the government, labour, business and civil society meet to deliberate on development.

But the interactions have not resulted in the adoption of a coordinated policy response to unemployment and to reducing poverty.

Even the National Development Plan has not had the traction necessary for its targets to be met.

After years of the introduction and neglect of economic plans and proposals, National Treasury has come up with yet another economic blue print that seemingly has not had the input of other government departments before being released for public comment.

As one of his flagship projects President Cyril Ramaphosa launched the SA investment conference to entice foreign investors to put their money into SA Inc.

At the same time, business confidence has been declining and remains low. While government talks up prospects of the SA economy, business is holding back.

Labour continues to make onerous demands on both the government and business while the prospects of a tax revolt are becoming ever more tempting for sections of civil society.

It is evident that the silo mentality is heavily embedded in the South African psyche on this issue of economic stagnation and developmental stalemate.

Minister of police Bheki Cele released the country's crime statistics yesterday, and they were not shocking at all.
Opinion
2 years ago

This approach is not working for the economy and it definitely will not work for other major challenges.

In responding to the recent xenophobic violence, Ramaphosa convened the security cluster. It was addressed primarily as a crime issue as well as an international relations affair. The economic cluster was not engaged.

The auditor-general was scathing of the state of local government when it released the outcomes of its audits.

If the detrimental results of failing to safeguard institutions from rot and corruption are not already clear, they are evident for all South Africans to see right in their own backyard.

There is an established link between the poor state of governance, disappointing economic performance, fraught labour relations and dire social outcomes.

In the aftermath of state capture SA is experiencing the consequences of a breakdown of institutions meant to protect the public from the abuse of power by politicians. The effects are being felt in a stagnant economy and social upheaval.

SA needs to revisit its political settlement and to consider its implications for the social and economic conditions of all citizens.

A senior parliamentarian has stepped in after a Cape Town mother had to make five attempts to report the rape of her three-year-old daughter.
News
2 years ago

The rise in murders, attempted murder and rape are a clear indications that there is a serious breakdown in law and order in the country. This is ...
News
2 years ago
Next Article