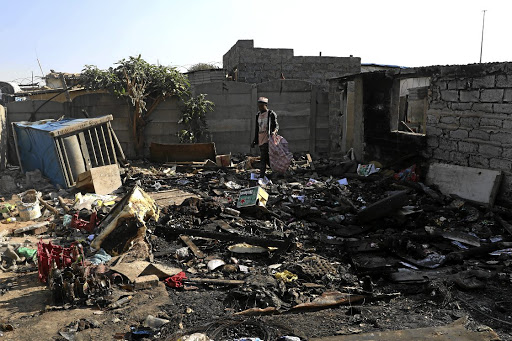 Foreign nationals were chased away and their shacks burnt in Vusimuzi, Tembisa, on Wednesday night. / Thulani Mbele

Last week ministers of the security cluster told the nation that they do not know who is behind the recent spate of violence against foreigners.

The ministers admitted that their intelligence forces were caught napping by the violence, vowing that, now that they are awake, they will take care of the situation.

We who have not been sleeping have a national duty to let the slumbering ministers know who is behind the violence, and how to make the ministers aware that the intelligence will not be able to resolve the situation.

The recent violence has been caused by the ANC and its government over a period of 25 years. The ANC government has engineered the crisis in four ways.

First, the ANC has presided over a dysfunctional public education system that has thrown millions of young black people into an ever-expanding reservoir of joblessness.

Look at who is terrorising foreigners. You will see the tormentors are mainly young, and black, the ANC's unemployed children, born in the 1990s. The ANC has failed to educate them.

Second, the ANC government has failed to create factories that would provide employment to the hordes terrorising foreigners.

The Afrikaners used state-owned companies to employ their own uneducated people during apartheid; the ANC has run those companies aground.

The rich and ANC-connected tenderpreneurs produce nothing; they are either suckers of state revenue in the form of tenders or recipients of dividends from white-owned businesses in the form of BEE. They cannot create jobs. Who do you expect to employ millions of unskilled black people?

Go to any restaurant in South Africa, and you will find a Zimbabwean working there. All the jobs that used to belong to unskilled South Africans are now taken by foreigners.

If South Africans can no longer be employed as security guards or petrol attendants, where do you expect them to work? Go to Malawi, Zimbabwe or Nigeria; you will never find foreigners doing such jobs.

The last area of ANC failure is crime. It is not fiction that there are foreigners who have brought a culture of drugs to South Africa. People living in poor communities have seen their sons and daughters destroyed by drugs brought into their communities by foreigners.

The problem is that communities have lost trust in the police, for corruption in the police is rife. Criminals know that you can bribe a police officer any time.

Nigerians repatriated after a wave of xenophobic violence in SA were reported to have been offered soft business loans, R1,600 in airtime and 9GB of ...
News
2 years ago

That is what ordinary people experience daily. Our so-called ministers have completely lost touch with reality; they live in glass houses somewhere in Pretoria and Cape Town. Poor black people have been left to their own devices in dysfunctional communities.

The crisis is socio-systemic, created by state failure over two-and-a-half decades. When we wrote in our book, The Fall of the ANC, that the party was not ready to govern, hollow tins in the party and fat cats in government hurled gigantic curses against us. Look where the country is today.

The simple truth is that the ANC has reached a dead-end. The party does not know what to do with SA. Other than beneficiaries of patronage, no sane human being believes the ANC can create jobs, having failed to do so in 25 years.

The saddest thing is that the ANC has collapsed the state, the only instrument the poor had. Look at public hospitals or schools; everything is broken. Those with money, including ministers, live in a private sub-state, where things work better.

What must the forgotten poor black people do? It seems the youth have decided to take matters into their own hands. Cry the beloved country!