Steve Biko was clearly ahead of his time 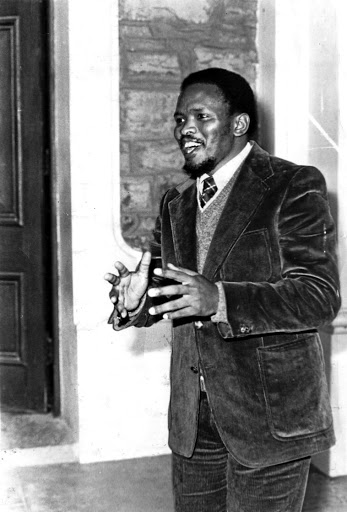 Steve Biko outside the King William's Town magistrate's court in July 1977, two months before he was killed. / Daily Dispatch

Steve Biko died when he was just under 32 years, but by that time he had already been a leading part of the formation of organisations that were to propel the Struggle for freedom higher and higher.

He had also written enough to be later compiled into a book, I write what I like, which to this day remains one of the most lucid exposition of the black experience.

His insistence that mental liberation has to precede physical liberation remains to this day, the cornerstone of understanding our present-day situation when we seem beset by a madness that can only come from mental slavery.

How, otherwise, do you explain adults burning a school, leaving poor children to moan and say "our parents burnt our school that is why I cannot go to school". Or university students, when not burning a law library, or throwing beds out of fourth floor windows, chasing a cow down the street and hack it to pieces before carting the meat to their hostels.

While Nelson Mandela, Oliver Tambo, and Desmond Tutu are rightly venerated for their role in opposing and ending white minority rule in South Africa, ...
Lifestyle
3 years ago

Or indeed, how people can burn trains day after day and then moan that the service is getting worse. Or the people of Vuwani who not only burnt more than 20 schools but decided on a peaceful day, to go and create a bonfire on the tar road, and cook food, giving new meaning to a cookout.

How does one explain fully rational people in Soweto, living in four-bedroom houses with all the modern appliances such as geysers, stoves, washing machines etc, refusing to pay for electricity but are up to date with their DStv subscriptions?

If we were mentally liberated would we do such damage to our environment through littering, overuse of plastics, and turning any empty space into a dump site?

When I collided with Biko's writings I was at high school. I had dabbled in trying to understand our situation as black people through the Bantustan politics, thinking maybe the guys in opposition were opposing the system.

I graduated from that to liberal politics of Helen Suzman's Progressive Party and its qualified franchise. Through this system, anyone with matric, or immovable property worth R50,000, would be given a vote irrespective of race.

Take up your responsibility for the country's sake‚ says Sobukwe

The grandson of Robert Sobukwe‚ Tshepo Sobukwe‚ has urged South Africans to avoid leaving the responsibilities of their own emancipation to the ...
News
5 years ago

It sounded right until Biko pointed out that with that system, all whites, for whom schooling was mandatory until matric, would qualify to vote. However, the vast majority of blacks who neither had matric because they were denied that education, nor the money, would be denied the vote.

It was fresh thinking, espoused in a language that a high school kid like me could link with. And with that came liberation, at a personal level, from the shackles of system politics and liberal double speak.

I was black and I was proud and have not looked back since. And I was part of a mass of people who realised this and united across the narrow divides of ethnicity, welded together by our experience and our determination to fight together and win for all of us.

Biko knew the importance of unity of the oppressed and understood that it would not just happen but had to be forged through mobilisation. Hence his stance that black people had been hollowed out, their humanity taken away.

Which explained why the meek and subservient worker would tolerate being abused and then go into the toilet to curse his white master but then come out wringing his hands, meekly taking more abuse.

Biko said for the revolution to succeed, that shell of a man had to be infused with a new life of pride and blackness because the success of the revolution depended on his full participation in the Struggle to liberate him.

Biko had decided that this was his country and he was going to live as a free man, hence the defiance of the banning order to travel to Cape Town, from whence he was returning when he was arrested and tortured to death.

But he had foreseen his death, telling us that the manner of one's death can be a mobilising factor. And his was just that. The world went into outrage on steroids about his killing, and the chilling details of his last hours behind the van, were numbing.

Conditions in detention improved after his death, an Inspector of Detainees, who was a magistrate, was appointed, and when my turn to be tortured came, in those dark hours of suffocation, Biko's condition kept one going.

Today marks the 41st anniversary of Steve Biko’s death. Although much has been written about him, you might not know these seven Biko facts.
S Mag
2 years ago

And when the Inspector came and I showed him the injuries, I was not touched again, even though the matter was never fully investigated to the point of sanctioning my torturers.

And so Steve Biko for me represents the highest possible commitment to our people, to the point of death, and an understanding and analysis of our condition that remains even more relevant today.

In June, when President Matamela Ramaphosa honoured me with the National Order of Ikhamanga in Silver, I went to the ceremony dressed in a dashiki shirt with his face and the words "The Most Potent Weapon in the Hands of the Oppressor is the Mind of the Oppressed".

It is a powerful statement that sums up our situation today and formed the backdrop of a discussion on June 15 when my family celebrated the Ikhamanga.

And at that celebration we had a panel discussion on why black people were killing each other, destroying the country, and generally behaving like mad people who have a home elsewhere whence they will return once they finish destroying this one.

The conclusion of the discussion was that at the point of the fall of apartheid in 1994, when the physical shackles lifted, the psychological and mental chains remained in place. Which explains the irrational behaviour that now characterises any grievance that people may have.

And the call, embodied in what we called the Makhado Declaration, was for all of us to find the Biko in us, start talking in groups and communities, about how we stop the slide into the abyss.

If we do that, Biko will stop turning in his grave as I am sure he does each time one of us behaves badly.

ATHI Mongezeleli Joja's opinion article provided arguments in support of Steve Biko as a violent leader and explanations on how the dominant ...
News
6 years ago

The quiet violence of Steve Biko

The black consciousness founder is distorted because it suits those in power, writes Athi Mongezeleli Joja ESSENTIALLY Steve Biko was a violent man. ...
Lifestyle
6 years ago

A tale of 3 towers: Biko, Lewis Nkosi and Nat Nakasa

THIS is a tale of three towers, how they fell, and how we choose to remember them. This is a tale about memory, for as the poet Don Mattera once put ...
News
6 years ago
Next Article