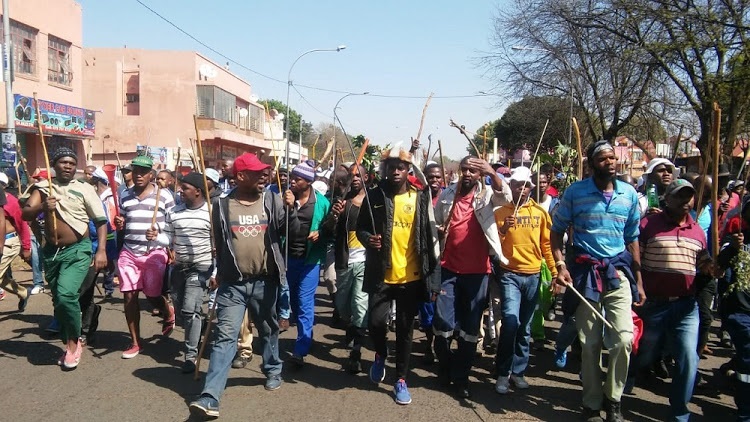 A group of men goes on the rampage in broad daylight in Africa's richest city, destroying property and injuring 16 bystanders. Two people are reported dead from the violence.

Instead, the looters give the minister of police and the government an ultimatum: "Give in to our demands within 24-hours or more mayhem will follow."

They want foreigners chased out of SA. "[Former Zimbabwean president Robert] Mugabe is dead, foreigners should go home," they sing.

They are heavily armed and would not even listen to an elder, and a man they once respected, former IFP president Mangosuthu Buthelezi.

Residents of hostels in eastern Johannesburg earlier on Sunday marched along Jules Street in the area, demanding that  "foreigners must go back to ...
News
2 years ago

These heavily-armed men are hostel dwellers and the footage of them roaming around the city centre wreaking havoc are a reminder of a dark period in our history where mob attacks were the order of the day.

Back then we blamed most of the violence on the apartheid state which armed and protected paramilitary groups who killed and maimed in our communities in a bid to stop the dawn of freedom day.

Today, there is no third force to blame. This is entirely our failing as a country. How is it that 25-years into democracy and with a social housing programme that is the envy of many developing countries, we still have people living in semi-militarised zones called men's hostels?

President Cyril Ramaphosa has instructed police minister Bheki Cele to engage with the indunas of the hostels in an effort to quell the violence ...
News
2 years ago

Over the years some of these hostels have become the epicentre of lawlessness whether you are talking cash-in-transit heists; car hijackings, murder and gender-based violence.

Of course they are not the only area where these are prevalent, but they are definitely among the hot-spots. Yet there is no political will to do what is most obvious, which is to systematically do away with this kind of living and encouraging dwellers to move into family units where men do not organise themselves into self-styled bandit armies.