Who benefits from the ongoing chaos and conflict in SA? 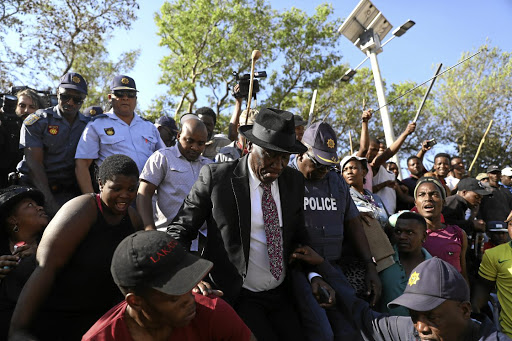 The recent wave of xenophobic attacks and looting across cities and towns in South Africa tell us that the country's fragile peace is barely holding.

This latest rampage across Johannesburg, and some parts of Ekurhuleni, is among a spate of violence targeted at foreigners that has flared up periodically across the country since 2008.

There have been many debates about the nature of the violence. Whether it is motivated by xenophobia or more specifically, Afrophobia. Or whether it is a symptom or by-product of the slowing economy that is increasingly failing to absorb the country's working-age population.

President Cyril Ramaphosa tweeted that he would be convening ministers in the security cluster "to make sure that we keep a close eye on these acts of wanton violence and find ways of stopping them".

Police minister Bheki Cele speaking at Jeppe police station on Tuesday described the spate of attacks as defined by criminality.

He is echoing what has become the official line from government that these acts of rampant looting and attacks against business owners, most of whom happen to be foreign nationals, are acts of criminality by opportunists who are taking advantage of the situation.

If it is just a matter of crime that these attacks are continuous, it indicate a glaring failure of police intelligence, crime prevention and law enforcement. These waves of violence are often planned, well-orchestrated, take place in broad daylight and have a contagion effect - spreading from city to city across the country.

The police should be well aware of the modus operandi of the "criminals" that are perpetrating this violence.

Looking at the evidence of the damage done to shops and businesses that has been captured by journalists and members of the public, the police have not been effective.

By isolating the issue to a matter of crime, the government misses the opportunity to deal with the issues that account for the fractures in the country's communities. The response fails to analyse the actors involved.

The SA music scene has been jolted by an overwhelming cultural boycott as a result of the xenophobic attacks in SA.
News
1 year ago

Who is organising these attacks? What are the power dynamics at play in communities? Why is it that community members are influenced to act on the messaging against foreign nationals?

Such a response further fails to interrogate the conflicting interests and agendas that are at play. It also fails to explain who benefits from this ongoing chaos and conflict between South African citizens and foreign nationals.

Treating the situation as just a matter of policing has yielded very few results in terms of preventing and discouraging this violence.

The reality is that the answers are out there. And it is clear from some media reportage and scholarly research that this violence is more than just a matter of crime.

Illegal migration has been a hot issue and came under the spotlight during the country's recent general election in May.

The DA campaigned on secure borders, citing illegal immigration as a threat to the country. The party's mayor in Joburg, Herman Mashaba, has expressed sentiments apportioning blame for the city's crime on foreign nationals.

The South African Local Government Association (SALGA) has urged municipalities to be ready to provide shelter and temporary accommodation to ...
News
1 year ago

In 2015, King Goodwill Zwelithini was heavily criticised as having incited the xenophobic violence that swept across KwaZulu-Natal in April of that year after being quoted saying foreigners should pack their bags and go.

By highlighting illegal immigration and border security, politicians take advantage of the widespread discontent within the country's communities about their exclusion from enjoying the fruits of prosperity in a liberated SA.

Foreigners have become an easy scapegoat for leaders, organisations and politicians at the local and national levels for bad governance and corruption that has degraded the quality of life for millions of people in the country.

Large food retailer Shoprite has condemned violent attacks on foreign nationals and businesses on the African continent.
Business
1 year ago

Police minister Bheki Cele says the SAPS "will not apologise" for raiding businesses owned largely by foreign nationals in the Johannesburg inner ...
News
1 year ago

Taxi operations and municipal bus services are expected to resume in Tshwane on Wednesday afternoon following meetings between the taxi industry in ...
News
1 year ago
Next Article