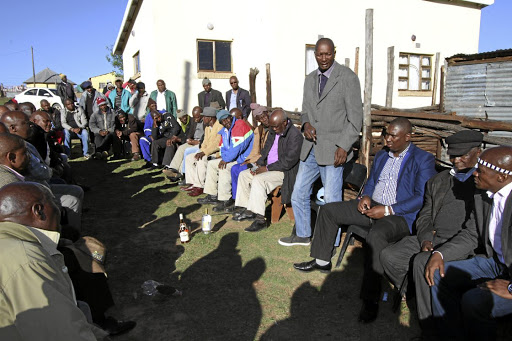 This is how it started: this Zulu chap from Durban finds himself working in Cape Town where he meets this beautiful Xhosa lady. They fall in love.

But a few months after the romance has taken off, the guy gets a plum job in Johannesburg. He speaks to his lady about this, and she tearfully lets him go with the promise that they will continue their romance over the phone.

Long-distance relationships are fraught, as we all know. As a result they don't know if their promises to each other will stand the test of time. Faithful to their promises, they phone each other every day once they are apart. So the romance stays alive. At one stage, the lady even flies to Joburg to visit.

And lo and behold, fate is on the couple's side because almost a year after the guy left Cape Town, she propitiously finds a job in the city of gold.

The guy thinks: "This is God's doing; these are the ancestors bringing us together." No sooner has she arrived than he proposes.

Basetsana Kumalo on women negotiating lobola: Women should be given a seat at the table

Now, because these two lovebirds are black Africans from deep traditional backgrounds it is inevitable that the guy should ask his lady to alert her people in Cape Town to expect emissaries to get lobolo negotiations started.

In the meantime, he also alerts his own people in Durban about the journey he is about to embark upon.

A date is set. Then the guy flies to Durban to pick up his father and the father's mate who has been chosen as one of abakhongi, emissaries.

On the advice of his father, the guy has already appointed a Xhosa guy from Cape Town to be head of the delegation. The guy knows the language properly and is au fait with the intricacies of Xhosa culture.

In Cape Town, the negotiations begin. In keeping with tradition, our main man stays in the car, which is parked away from the lady's house where the haggling is taking place.

On the flight back, the old guys explain to the young man that the money he'd given them was more than enough to cover what the would-be in-laws were asking for. But, the old guys explain, it would have been considered rude to settle the full ilobolo on the first visit.

So another date is set for the next round of the negotiations. By the time the chap gets to Joburg, he is all dejected and angry. When he gets home, he asks his lady: "Why don't we just defy the old people and get married in court? This process is a waste of time and money."

She says: "But we've already started on the traditional route, so let's go the whole hog."

A few months later, they finally get married - a white wedding, and a traditional shindig rolled in one.

Twenty-two years later, happily married with three children, he reads in a newspaper that shops are now selling a prepackaged agreement called Lobolo Negotiations Agreement for Marriage. The guy laughs and thinks: "Damn, this book should have been published way back then, to save all those flights taken to Cape Town, and all the stress that was attendant to the haggling between the two families."

But then the guy wonders: "Would these traditional Zulu and Xhosa families have agreed to sign a paper agreement instead of slogging it out through poetic words?"

This story is obviously exactly what happened between me and my wife.

When I read about this prepackaged agreement, a part of me thought it was an insult to tradition, but another said: "We don't use cattle as ilobolo any more but we use money. So why can't we conduct these negotiations the modern way - through writing?"

An Eastern Cape mother who allegedly forced a girl aged 14 to marry an older man - and then accused her of shaming the family when she ran away - ...
News
2 years ago

The tycoon says all she wants is for him to pay her back.
News
2 years ago
Next Article