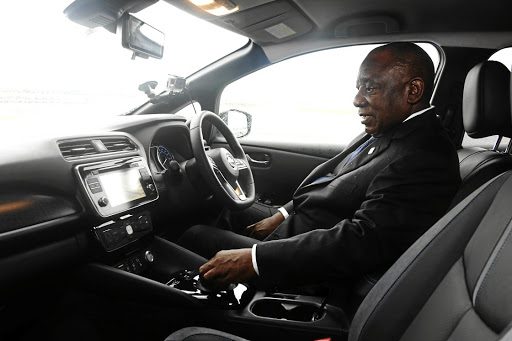 President Cyril Ramaphosa failed to provide clarity on the mixed messages that the ANC and the government were giving to investors.
Image: Siyabulela Duda.

The economy is by far the single most important issue in South Africa today.

Many of the tensions in society and the increasing contestations between different groupings would be mitigated by improved economic performance.

If the current debates over the legacy and historical baggage of the past - such as land reform, race relations, redress, redistribution and social justice were taking place against the backdrop of a booming economy in which business confidence and labour absorption were high - they would be more constructive.

Trying to deal with inequality and the accompanying social ills through greater state intervention, higher taxation and the expansion of the welfare system without industrialisation and economic revival is like pouring water into a bucket with holes.

President Cyril Ramaphosa should be able to provide leadership and answers to this very pressing issue.

He should inspire confidence that the government is making headway in creating an environment that encourages not just investment, but the type of investment that speaks to the country's priorities, with job creation being key.

South Africa is not the only country to face seemingly insurmountable challenges. Examples the world over show that development requires a strong and capable state.

In Parliament last week, Ramaphosa met questions regarding the ANC government's approach to economic renewal with an air of irritation.

He quipped that DA leader Mmusi Maimane constantly asks him questions with reference to the same issues; Eskom, expropriation without compensation, nationalisation of the Reserve Bank and prescribed assets.

Needs of SA's majority must be put ahead of elite, narrow interests

The thrust of Maimane's question was the mixed messages on policy that the ANC and the government were giving to investors on the issues.

It is not the oppositions' questions that are regrettable, but the vagueness in the responses given to their probing.

Following up on the DA leader's question, EFF MP Mbuyiseni Ndlozi put it to Ramaphosa that the National Development Plan (NDP) had failed because the target of reducing unemployment to 14% by next year would not be reached.

Ndlozi asked whether it is not time that the ANC-led government abandon the NDP and pursue another path that would place the state at the centre of economic production and control?

Ramaphosa didn't offer a cogent response, neither did he rebut the assertion about the failure of the NDP.

Ramaphosa also did not highlight specific remedial policy interventions and actions that his government had adopted to respond to the failure.

For an administration that took power on the ticket of renewal, it is of concern that instead of doing this, Ramaphosa hid behind the advice of the public protector Busisiwe Mkhwebane to defer answers to questions that he is not sure about.

The economy is a question that should have been and should be exercising Ramaphosa's mind daily.

It should be top of the agenda of every cabinet meeting.

The governing party should also be constantly preoccupied with answering questions about providing the policy environment that leads to growth and national wealth creation that translates to creating employment and lowering poverty.

That said, perhaps Ramaphosa was wise not to offer an answer that could possibly add to the confusion over the country's economic policy.

While Ramaphosa takes the opportunity to reflect, attention should now be turned to the latest proposal coming from the National Treasury.

The paper titled "Economic transformation, inclusive growth, and competitiveness: Towards an economic strategy for South Africa", released by Finance
Minister Tito Mboweni
could be just what is
needed to bring coherence to the country's economic policy.