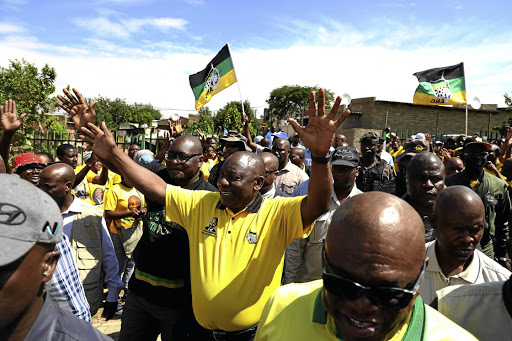 President Cyril Ramaphosa and his new dawn so far is known for bankrolling countless commissions of inquiry with no conclusions that lead to conviction of implicated politicians.
Image: SANDILE NDLOVU

The legend of the frog in the pot is well known, the frog that enjoyed warm water in a heated pot - only to die when the water reached boiling point.

Most South Africans are not different from that frog. They, too, celebrated Cyril Ramaphosa's warm water, and it is now beginning to boil at 29% unemployment.

Warm water is very nice, especially in a winter of despair. And so was Ramaphosa's entry onto the scene. He came with bags full of tantalising goodies - some he called "new dawn", others he named "stimulus package". Music was playing in the background: Thuma Mina!

To the excited volunteers who sang at the top of their voices in his Thuma Mina choir, we ask: Where are the jobs promised by his investment summits, gender summits, and stimulus packages?

It is true that the "new dawn" did install a new head of the NPA and Sars, but there is no evidence of serious institutional revamp of the state.

Our money has been used to bankroll countless commissions of inquiry, but no single politician has been arrested.

Ramaphosa the supposed messiah came in riding high on a mythical horse, wearing a pretentiously authoritative cowboy hat. His handlers in big business sold him to us as a former businessman who knows how to fix the economy and create jobs. Alas, the handlers were selling ice in winter.

A businessman is one who starts a business from scratch, and grows it until it becomes established. Typically, a real businessman sells something to other people. Richard Maponya and Mike Nkuna are examples in this regard.

A BEE beneficiary is he who is invited to participate in a pseudo-business scheme put together by white business people who need a dark skin colour in their boardroom. Such white business people are clever; they go for politically connected fellows like Ramaphosa and Tokyo Sexwale, and later market them to us as businessmen who know how to create jobs.

Even as summer approaches, no one must henceforth sell us the Ramaphosa-businessman ice. Truth has melted it permanently.

Even if we were to be generous, and scrutinise Ramaphosa as a patiently ambitious politician, we would still find a biographical man in the place of substance, a man in the business of building an impressive CV. Ramaphosa's positive stories catch fire easily, even though you will not find a book, or a speech, written by him that tells you something of substance about the man.

Ghost-written as it was, no one can miss Nelson Mandela's voice in Long Walk to Freedom. Short as it is, Thabo Mbeki's I Am An African speech reveals everything about the author's intellectual depth. Where is the evidence of Ramaphosa's mind, other than legends about the drafting of the constitution? We all know that the constitution was drafted by a committee, not by Ramaphosa and Roelf Meyer, as inventive marketing agents would have us believe.

On the economic front, it is worse that Ramaphosa belongs to a liberation movement. Liberation movements don't know how to manage an economy. Which one in Africa has grown which economy? Can the hollow tins in the presidency please show us!

What, then, does the future look like? We must expect more job losses as Ramaphosa continues to deliver meaningless speeches. When the political heat become more intense, as it sure will in the chaotic ANC, the man on a horse will stampede out of the theatre. He will tell us that, like Mandela, he does not want a second term, and withdraw to his new mansion in Cape Town. And the frog will boil to death.