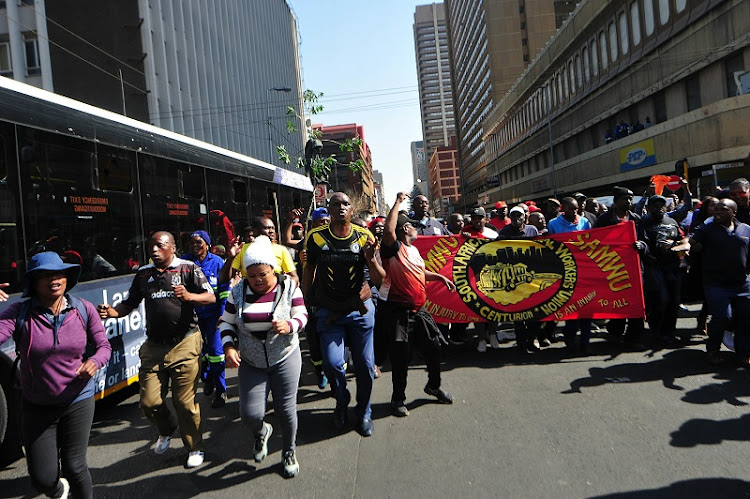 Hundreds of City of Tshwane municipal workers protest over salaries in the city centre. The workers are demanding 18% salary increase backdated to 2017.
Image: Veli Nhlapo

In the run-up to the 2016 local government elections, when survey after survey suggested that the ANC was beginning to lose its grip on power, one issue seemed to be troubling DA strategists who were expecting to make gains from the former liberation movement's decline: How to manage a relationship with ANC-aligned trade unions who would remain a dominant labour force in areas that the DA would govern.

Some believed that the ANC would not accept defeat and would use the unions to disrupt and undermine the DA-led governments in the municipalities.

The feared nightmare never materialised. Even though some DA-led municipalities have been hit by strikes over the past three years, these have not been out of the ordinary and tended to be on par with the strikes the same unions wage against those municipalities run by their alliance partner, the ANC.

It would therefore be disingenuous of anyone to suggest that the ongoing unprotected strike in Tshwane by members of the SA Municipal Workers Union is part of a political ploy to undermine the DA government.

The city needs to take responsibility for its handling of the source of a labour dispute that brought the capital to a standstill this week.

Gauteng MEC for cooperative governance Lebogang Maile has written a letter to the City of Tshwane mayor about the alleged R7m golden handshake ...
News
2 years ago

Even if the city was justified to do so and the 64 had indeed been short-changed for a while Tshwane should have been transparent about its intentions to do this when it went for the latest round of wage talks with the unions.

Instead the city convinced unions and their members to accept a 6.5% raise on the ground that the city, like the rest of government, could not afford double-digit increases.

And then, behind the workers' backs, the city went on to give huge increases to the bosses.

It is this kind of insensitivity that leads to a breakdown of trust between workers and employers.

Tshwane must reverse this decision and start a new and meaningful conversation on how the disparities, if they exist, can be corrected without disadvantaging any category of workers.

The drama between the City of Tshwane and its beleaguered manager Moeketsi Mosola took another twist on Wednesday when he was placed on special ...
News
2 years ago

City of Tshwane and Moeketsi Mosola have agreed to part ways “amicably ” this week in a move that will see the embattled city manager pocket about R ...
News
2 years ago
Next Article