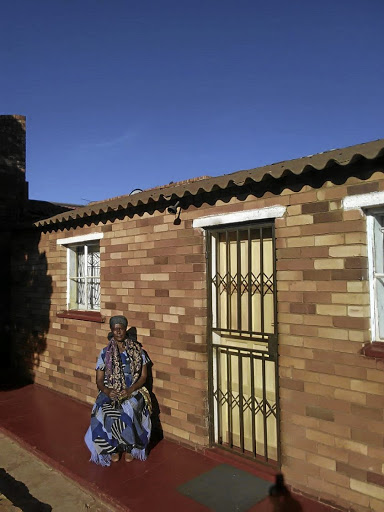 Third wife Gloria Maswakhomu, the mother of Charlotte and Caslida.

The death of parents can mark the beginning of sibling feuds and the selling of family houses secretly in some homes.

This can also happen after the death of a husband in a polygamous marriage.

Consumer Line has over the years received similar complaints, some of which were resolved after we referred feuding relatives to the family courts.

Though the Maswakhomu family won the case to occupy their house, their aunt proceeded to sell their common home and they are now allegedly being harassed by a neighbour who bought the house.

Charlotte, 34, and Caslida, 41, Maswakhomu of Chiawelo Extention 2, Soweto, said their problem started in September 2015 when their aunt decided to sell the home to their neighbour.

They said their father had married three wives before he died in 2001.

Their aunt, their mother's elder sister, did not give birth to boys while married to their father and there was then an agreement between her and him that he should marry her younger sister. That arranged marriage resulted in their mother being the third wife.

Charlotte said her father bought the house after marrying their mother in terms of customary law.

"They all agreed that the Chiawelo house would be used by all when they come to Johannesburg in search for employment and schooling," Caslida said.

Even though their father left a will stating that he wishes all his wives and children should stay in all his houses peacefully, their aunt decided to go against that and evicted them from all the houses, including another one in Tzaneen, Limpopo, Charlotte said.

Upon investigation they discovered that their aunt had used a fraudulent title deed to sell the Chiawelo house and they were able to get their eviction letter set aside.

"Our only challenge is Ronny Mabunda who bought the house as he recently brought the nyaope boys to evict us," they claimed.

"These boys are on our yard almost every night to watch over Mabunda's belongings [that] he left outside the house," Charlotte said.

Mabunda confirmed that he bought the house from their aunt and that he had also attempted to evict them in the company of the "nyaope boys".

He said he was aware that it was family house but had no duty to get consent from all the three widows as he was dealing with the eldest one.

Mabunda denied that the "nyaope boys" harass the Maswakhomu family.

"We came there once with the nyaope boys and stopped after the high court set aside the eviction order," he said.

Mabunda said he could collect his goods once he finds space to keep them.

"Tell them to report the nyaope boys to their nearest police station." He said he would not be evicting them, but will have to sort out the payment issue with their aunt.

"Tell them I'm out of this and they must leave me alone."