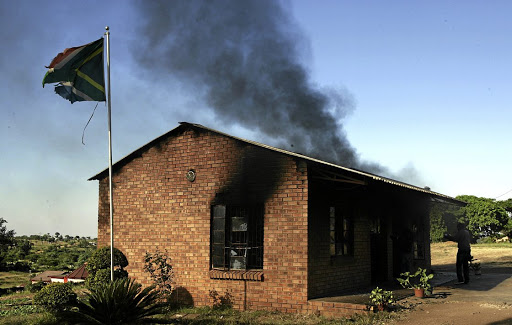 "The incident with the excavator," reported the Potchefstroom Herald online edition of June 26, "seems to be a continuation of ward 19 protests".

Protests at the Potchefstroom township of Ikageng began early last week, with ward 19 residents demanding the resignation of the ward councillor as well as land for residential use.

And then, on Tuesday June 25, came the incident with the excavator - by all accounts, a dramatic and deeply distressing affair. It was captured in a 28-second video that was widely circulated on social media.

In the video, an allegedly hijacked grouser-padded excavator digs up and destroys a tarred road at the Sarafina entrance near the N12 highway between Klerksdorp and Potchefstroom.

A group of people are gathered around the machine watching approvingly as it ploughs into the surface, slowly but determinedly scooping and strewing the once-compressed earth and rubble of tar.

To lend credence to the hijacking claim, the operator's patchy yet ruinous manoeuvres suggest that they are something of an amateur.

The protesters' astounding reasoning appeared to be that the destruction of the road - a hugely expensive and critical infrastructure to that immediate community and the country - was an appropriate expression of grievance.

This is not isolated. Protest of this kind is fast becoming the normative standard of post-apartheid political action.

In 2012, 62 schools in the Northern Cape's John Taolo Gaetsewe district were closed for over four months, affecting 16,000 pupils. A library was burnt down, computers at Bogelakgomo Primary School stolen and part of Nametsegang High destroyed.

Communities had been demanding that a 100km-long stretch of road linking their villages to the N14 highway be tarred and that the then Gamagara local municipality mayor, Maria Diniza, resign over poor service delivery.

An ANC member from the Western Cape was killed in a "multiple vehicle accident" after reportedly trying to do a U-turn to evade violent protest ...
News
2 years ago

In August 2014, communities around Kuruman shut down 54 schools for over three months to demand a tarred road.

And then there was, perhaps the costliest of all post-apartheid protests was the razing of over 40 schools in Vuwani, Limpopo, during the 2017 protests against a municipal border demarcation.

About 3,000 pupils in Zebediela, Limpopo, have not attended school for the past four months as the community demands a tarred road.

Last week, a library at Mmamati Primary School was torched.

What are the political and social psychological factors that give rise to such manifestly self-injurious measures? Why did we not see such widespread destruction of public property as an organising principle of local community struggles during the apartheid era? 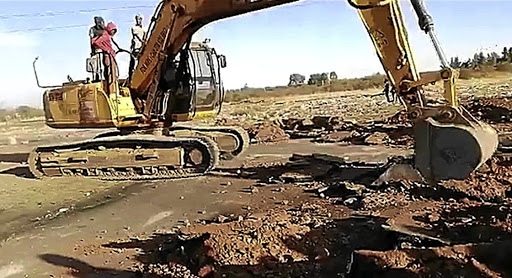 A hijacked grouser-padded excavator digs up a tarred road near the N12 highway between Klerksdorp and Potchefstroom.

Why have such methods of political engagement emerged? Why are adults deploying the innocents as child soldiers, turning them into casualties of otherwise legitimate struggles?

The frequent occurrence of these forms of protests suggests increasing distance between the political leadership and the governed, and the widening chasm between sections of society and the institution, idea and meaning of government.

In their imagination, and within the media space, the protesters relentlessly portray and accentuate their narrative of marginalisation and exclusion as an abiding characteristic of our society.

In nearly every community protest, the usual refrain is that: "We are doing this because no one listens to us."

Even if the assertion was accepted at face value, the question remains - does the end justify the means?

There appears to be a growing perverse and deeply troubling view that public property is no longer a common national asset, where the government merely acts as the custodian, but that it is the possession of officials and politicians at best, and, at worst, belongs to no one in particular.

We must also be constrained to stress the complicity of the failure of leadership: that, if ministered without the requisite thoughtfulness, prudence and ethical regard, the power of example that resides in leaders is likely to result in a harvest of thorns.

Such deficient leadership ignites negativity. Though not as immediately visible as the burning of a school, a clinic or library, when any section of the leadership - in whom public trust is vested - extends favours to itself from common national resources, this is as damaging and grotesque as the mindless action of the crowd that torches a school, a library, a road or any other public amenity.

Moreover, nearly all protests to which we have been witness for a number of years have features of proxy inter- and intra-party political skirmishes.

Community members are most affected by protests

Someone has to break the silence regarding this new method of demonstrating for service delivery used in our townships lately.
Opinion
2 years ago

It has become critical for the stability of the country for us to better understand the nature of the South African political party and the evolving methods and patterns through which it procures and sustains power - especially in economically distressed urban and countryside peripheries, where the public sector is the main source of income for the economically excluded majority.

These protests can arguably be seen as part of the manifestation of our post-apartheid centrifugal contentions; broadly reflecting the depoliticised nature of the South African political party and the short-sightedness of other players such as the trade unions and business leadership, all of whom increasingly rely on sectoral and factional - micro-sectoral - short-term tactical calculi.

No doubt, the police and the criminal justice system must respond to the wanton destruction of public property.

But the question arises as to whether police action is, in and of itself, a sufficient response to what is evidently a social and political phenomenon?

As the incident with the excavator was unfolding in Potchefstroom last week, some of our municipalities and state-owned enterprises were battling to pay salaries.

This brought into sharp relief the perilous state of our public finances and suggested, God forbid, that our finances may go belly-up if we continue business as usual.

Protest action between Potchefstroom & Klerksdorp. Protesters are closing all exits by destroying the main roads, please avoid when in area.

It was also a week when auditor-general Kimi Makwetu released the 2017-18 financial year municipal audit results, which painted a grim picture about the state of municipalities, with only 18 of the 257 municipalities receiving clean audits.

There is shockingly still no national and societal-wide conversation of the likely epileptic seizure that the nonpayment of salaries and Makwetu's report portend.

Yet we should all be exercised with respect to what we should and should not do in the short, medium and long-term.

The excavator incident points out the need urgently to embark on a national conversation about citizenship, rights, obligations and responsibilities in our post-apartheid and democratic South Africa.

More broadly, can we construct a post-apartheid society without a cultural revolution - and here one is not talking of the Chinese experience - however defined?

- Ratshitanga is head of content at Power 98.7 and writes in his personal capacity