Opposition parties did well to give Cyril Ramaphosa a reality check 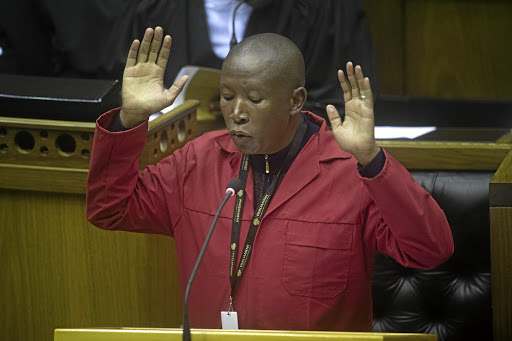 EFF leader Julius Malema described the president's speech as a concoction of "misguided, incoherent, contradictory and proven to be futile ideas mixed in a bag of fantasies". /Jaco Marais/Gallo Images

Opposition MPs stole the show in this week's parliamentary debate on President Cyril Ramaphosa's State of the Nation Address (Sona).

The EFF's Julius Malema's preamble was notable. The debate on the Sona at the beginning of every year is an opportunity for MPs to exercise their duty to hold the executive to account.

This means taking stock of what the government committed to in the past, what it has achieved and calling the president to answer for the gap between the two.

The opposition presented crisp and pointed critique of Ramaphosa's speech, whilst presenting their own positions and practical alternatives.

Differ as they may in their posture and angles, the leaders and representatives of the top four opposition parties agreed on one thing: Ramaphosa is not the man with the plan.

If taken as constructive criticism, Ramaphosa could not only improve himself as an individual, but make the necessary moves from imagining a fantastical future to delivering a palatable present reality for SA and all who live in it.

The imagery used by the various opposition MPs is worth recalling. Not only was it captivating, but also it was apt.

There is a "gaping chasm between what has been done and what the government intends to do.", this is how IFP president Mangosuthu Buthelezi described the disjuncture between Ramaphosa's dreams and aspirations for the future and what the ANC has achieved after 25 years of running the state.

At least Ramaphosa was honest about his party's poor showing - what the ANC has achieved is below par of what the governing party could have achieved if its policies did not pivot between pragmatism and achievability, and then schizophrenia and delusion.

Seeing that he cannot spin a good story to tell about the recent past, Ramaphosa opted to talk about how good the story could be in the future.

Beyond providing a good diagnosis of the problems in the country and putting together a solid list of priorities for his administration, his articulation of the solutions that are necessary to change the country's developmental trajectory.

The priority areas are concrete and should have informed the structure of the speech.

After proposing priorities, the remainder of the speech should have been a direct response to each.

The structure of the speech also says a lot about the president's clarity of thought and his administration's ability to home in and focus on issues that are material to the achievement of these priorities. Frankly, Ramaphosa was found wanting on this point as well.

Julius Malema did not mince his words and described Ramaphosa's speech as a concoction of, "misguided, incoherent, contradictory and proven to be futile ideas mixed in a bag of fantasies". The incoherence of presentation makes it painful for the listener to glean out meaning.

Like DA leader Mmusi Maimane put it, "we don't need faster horses", referring to how New York city dealt with its manure problems in the mid 1900s, "but bold, new interventions."

It is true that even though Ramaphosa tried to inspire in the ilk of Martin Luther King Junior, with his reference to a dream, Buthelezi rightly pointed out that "two things were sorely lacking: the now and the how".

The opposition did well to give Ramaphosa a reality check, because clearly his trip on a Metrorail train that was delayed for four hours didn't do the trick.

Although the opposition had a field day, Ramaphosa's SONA can be commended for restoring Parliament to a house of substance and a battle of ideas.

ANC is strong when opposition is weak - political analyst

The ANC was able to retain power on a national level as a result of weak opposition parties who are unable to take advantage of the part'y factional ...
News
2 years ago

Pemmy Majodina on Cyril Ramaphosa's vision: 'No revolution without a dream'