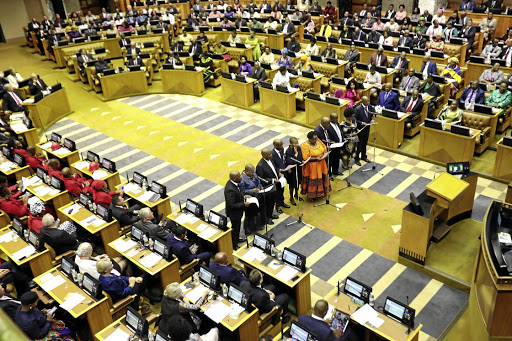 A number of former ministers who were sworn sworn in recently have resigned from parliament after they failed to secure cabinet posts in President Cyril Ramaphosa's team New Dawn. /ESA ALEXANDER

One of the consequences of the democratic dispensation is that politics has become a career choice like any other.

Resignations by former ministers should be understood as them exercising a career choice.

Unlike the context of the Struggle against apartheid, when those who chose to enter politics did so as an act of sacrifice and there was very little to gain from being politically active.

Even with the hope of a victory against the oppressive system, only the very elite felt guaranteed that they would somehow be rewarded for their troubles.

The overused notion that MPs accept their party's nomination solely because of their commitment to serving the people should be taken with a very big pinch of salt.

Most individuals are not interested in being stuck in the same post for a long time. They want to know that they can be promoted or that there are prospects for growth and mobility.

Becoming a minister, outside of becoming the president of the country, could be said to be the highest achievement of a career in politics. According to SA's electoral system, making the cut as a MP brings a person one step closer to attaining this prestigious position.

ANC Women’s League leader Bathabile Dlamini is the latest member of parliament to resign from the National Assembly.
News
3 years ago

In ANC quarters, to be picked as a minister is often a reward for being on the right side of the factional battles or policy wars within the broad church.

Even those MPs who fail to make the cut, are still grateful they made it into parliament to enjoy the big salaries and other perks that come with it. Some cross their fingers hoping to sneak in at one of the many reshuffles that have become part of the political culture.

For former ministers, by looking at their own performance in the previous administration and years of service in cabinet, they know they are unlikely to be called up in future.

With their prospects for promotion being limited, they would have weighed the losses against the gains they would make by remaining as MPs, with little chance of attracting attention as they would get stuck into committees' work.

Outside of parliamentary inquiries into the functioning of government departments and state-owned enterprises, what they do would be little known to the public.

That is more like a demotion after the accolades and prestige of running a government department.

Former minister of labour Mildred Oliphant has resigned from parliament.
News
3 years ago

Then of course, there is the much spoken about financial considerations.

Service to the people alone can hardly be motivation enough to forfeit the accumulated pension and payout that comes after years of service in the executive.

But there is something that these ex-ministers may know about where the true power lies in government. It's not in parliament.

The fifth parliament demonstrated what an uphill battle it is for conscientious MPs to play their oversight role over the president and his cabinet.

Party discipline often means that MPs of the ANC are compelled to close ranks with the executive whether they underperform or are complicit in corruption.

Being an MP can be a most frustrating post for an efficient and independent minded individual. This is not a comment on the calibre of former ministers.

Sadly, for ANC MPs in particular, parliament is just a waiting room for possible promotion to cabinet.

ANC Women’s League president Bathabile Dlamini said she was made a scapegoat and an easy target as she resigned as a member of parliament on Tuesday.
News
3 years ago

Resignation of MPs not all that bad

Losing a job, any job, is not a pleasant experience. It is especially so for those, in the current economic climate, who then face the reality that ...
Opinion
3 years ago
Next Article